The Fishing for Kids Tournament has come to be recognized as the premier fishing tournament in the Pacific Northwest and is made possible thanks to the generous support of its major sponsors, including Vancouver Canucks, Wheaton Precious Metals, Delta Group, Macquarie, Helijet, Helly Hansen and Cosmopolitan of Las Vegas. Leading BC companies from a range of industries share a common goal to raise much-needed funds for families and children living with autism in BC. The West Coast Fishing Club’s 12th annual Fishing for Kids Tournament got under way in the usual elegant manner with the Saturday night kick-off reception held in the open-air ambience of Reflections Lounge in the Rosewood Hotel Georgia. With proceeds again going to the Canucks Autism Network (CAN), guests mingled with Canucks players and management representatives, along with CAN co-founder Paolo Aquilini. The evening was capped off by an intimate performance by legendary Vancouver recording artists 54-40, who then joined the rest of the entourage for the flight the following morning to Masset and helicopter shuttles to The Clubhouse on world-famous Langara Island. Bird’s eye view of North Island Lodge on the way to The Clubhouse. Jacob Markstrom ready to set out for some nice fish. After arriving to The Clubhouse, contestants made their way down to the docks for an evening of reconnaissance fishing in preparation for the two-days of competition that were to follow. The spirited camaraderie that is a trademark of the event ensued over the cocktail hour and dinner, but it was an early night for those intent on making their marks on the leaderboard.

Just before noon on day one, Tanya Mahe landed her first-ever chinook salmon, and not just any chinook salmon, but one that measured out to be just over 40 pounds. The bar had been set very high in the early going. The rest of the pack hunted long and hard but by end of day one there was nothing that came close to the hog Tanya boated off the east side under the guiding of Evan Minigan, who says she played the fish perfectly. On day two the contestants ground it out again, but to no avail. Tanya was this year’s hands-down winner, as her fishing partner Paul Cheung predicted she would be in an uncannily accurate manner the night before the tournament began. Scott Lyons finished a distant second with a 27, while a 22-pound version for James Monteith was good enough for third. Tanya’s win earned her a $200,000 cheque, which she promptly returned to tournament organizers to add to the $800,000 total raised for CAN. Brian Legge later congratulated her on behalf of The West Coast Fishing Club for the win and also for donating the spoils of victory to assist families living with autism throughout the province. Meanwhile, in the coho pool, there was a tie for first place between Sean Salem and Glen Eastwood, with identical 12-pound silvers. The tie earned Sean and Glen each an even share of the $25,000 first prize for top coho, but they wasted no time turning them back over to support an important cause. Canuck legend Manny Malhotra tied Trenton Douglas for second place with 11-pounders. Current Canucks forward Sven Baertschi’s 10-pounder matched those of Julie Catling and Harold Leishman to produce a three-way tie for third. Thank you to Tanya Mahe for donating her winnings back to the Canucks Autism Network. Manny Malhotra with a nice fish on the line. Another tournament fish being released. Perfect weather conditions for the Fishing for Kids Tournament.

On the final evening the merriment reached a peak, including an acoustic performance on the back deck by 54-40, but not before some heartfelt words of thanks were heard from Lance Andre, father of this year’s Wheaton Precious Metals Champion Child, 12-year old Dylan Andre. “It was an amazing experience to get to know Dylan and to be a part of this great event,” says Jacob Markstrom, official Canucks CAN Ambassador. “Meeting generous participants and hearing stories from families impacted by CAN throughout the week made this an experience those of us fortunate to be on this trip won’t soon forget.” Dylan Andre and Fin posing with the winner’s trophy.

With this year’s profits, the total raised for CAN by the tournament to date now stands at just under $9 million supporting children’s charities. Congratulations on behalf of The West Coast Fishing Club to Fishing for Kids Vice President Courtney Hatfield and to members of her organizing committee. The Club also wishes to sincerely thank the major sponsors for their generous support once again this year, including the Vancouver Canucks, Wheaton Precious Metals, Delta Group, Macquarie, Helijet, Helly Hansen and Cosmopolitan of Las Vegas. 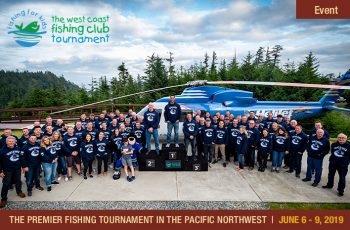 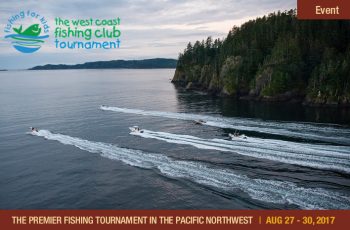 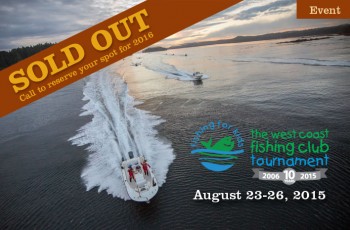