The first guests of the year at North Island Lodge knew they were in for an added treat, but nobody could have anticipated the culinary extravaganza that took place at Beale Cove June 1-5, 2015. Canada’s own Godfather of the Grill, Ted Reader, made his way west from Toronto along with fellow celebrity chef Christian Pritchard and then steered north to Langara Island with Park Heffelfinger, co-founder of Vancouver-based Memphis Blues Barbecue House. Be sure to check out our feature video from The 2015 Ultimate Grill Showdown. Once this trio teamed up with Executive Chef Liam Paul’s kitchen crew, there was no stopping the afternoon and evening parade of sophisticated, smoked offerings. The medley of southern hits included bourbon butter injected smoked brisket, pulled pork, ribs and a tasty little number called Tedbits, whose primary ingredients included fresh spot prawns and bacon. And if anyone thought fresh Pacific salmon wasn’t a fit for the barbecue boys, they were wrong. How about planked salmon with crab, oyster and dill stuffing? These were only part of the eclectic menu items that helped kick off the 2015 season at North Island Lodge and established a grand new tradition for The West Coast Fishing Club.

Having played to a sold-out house in its inaugural year, the Ultimate Grill Showdown is sure to be a popular special event trip, so book your spots for next year’s big smoke now. It all goes down again May 30 to June 3, 2016. 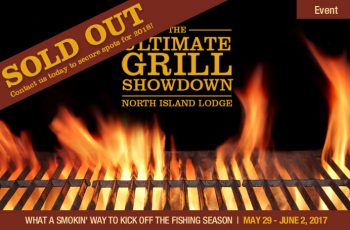