After a long cold winter and two years of reduced fishing pressure in Haida Gwaii, guests of The West Coast Fishing Club are no doubt eagerly looking forward to what everyone hopes will be a vintage season. But while always hoping for the best, what do we reliably know about the prospects for fishing in 2022, or any season for that matter?

The only thing we know for sure is that nobody knows anything for sure. BUT – that was a big but in case you didn’t notice – there are currently three circumstances that give us genuine reason for optimism as we head into The Club’s 34th season. 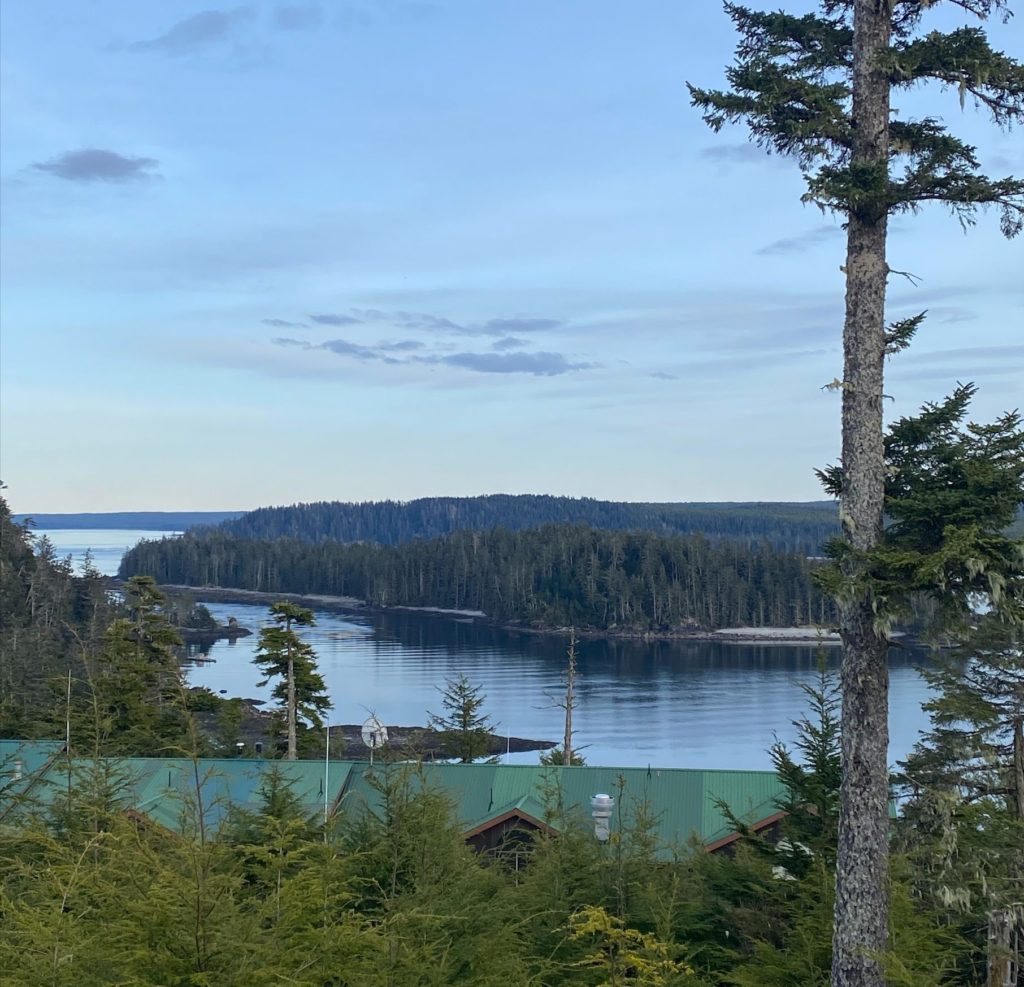 A serene May morning overlooking Parry Pass, captured by a Clubhouse staff member.

First, the opening weeks look promising owing to two consecutive years of extremely limited fishing in June, along with an encouraging report from fishery scientists in Washington state, who predict increased numbers of Chinook salmon in the annual Columbia River spring run. These fish – typically uniform-sized 14 to 20-pounders – will move southward down the west coast throughout May and June.

Secondly, there is some good news for the remainder of the summer too – there will be no commercial trolling permitted in the area until late August. This is the third year in a row that the commercial opening has been delayed, which will help sustain the action well into the summer and hopefully right into early September, which often coincides with the arrival of big Northern Coho up to twenty pounds in size.

Thirdly, there was no commercial harvest of roe herring anywhere on the North Coast this year, which fisheries experts are hoping will help rebuild stocks upon which salmon voraciously feed. On that note, there is a recent report of a nice spawn in Port Louis, which is always encouraging, particularly to guests of The Outpost. 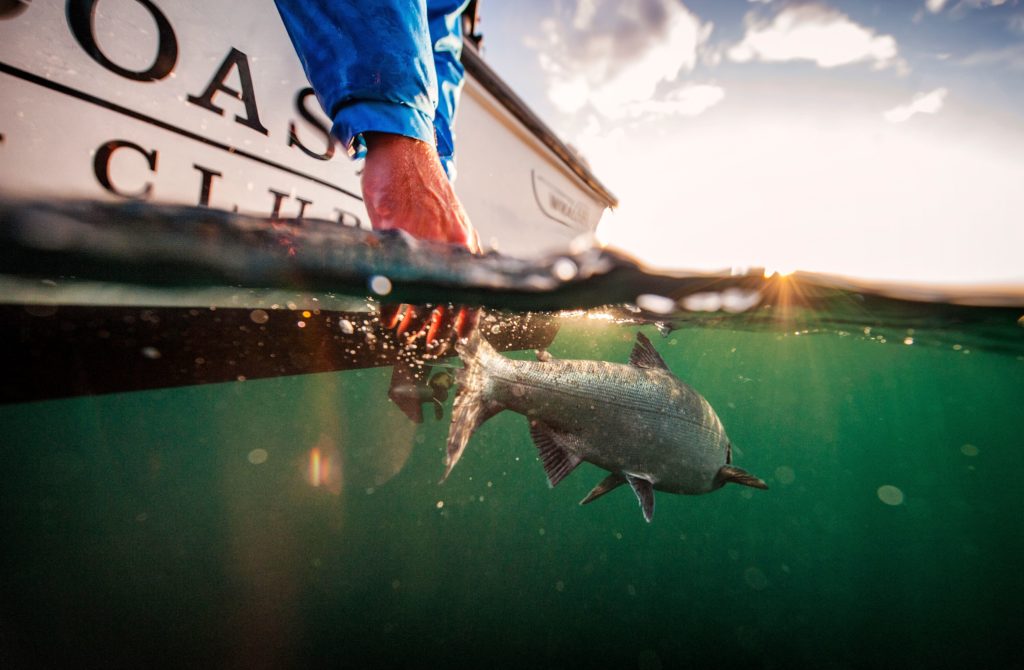 The Club is proud to continue the Catch & Release program in 2022, for more information please follow the link.

But irrespective of what the early season indicators might be, there is one universally accepted principle among Pacific salmon fishing veterans: The more remote the location, the better the fishing tends to be. And there is no place more remote on the entire BC coast than Haida Gwaii.

Equally important, this marine wilderness region is also the first stop for all species of wild Pacific salmon as they make their way from the Bering Sea to natal waters. A sizable majority of these are destined for an estimated 1,300 rivers and streams in BC, notably the Skeena River and Nass River systems in northern BC, and the Fraser River and its countless tributaries in the south.

A new crowd of tourists has converged on the archipelago of Haida Gwaii in recent weeks. It’s not what you think though. These tourists are known as Bigg’s Orcas and they have been appearing in ever-increasing numbers. Also known as Transients, Bigg’s Orcas are the sub-species of apex predator responsible for the term Killer Whale, since they hunt marine mammals, including sea lions and other whales. Their range encompasses the same waters as those used by their Resident cousins of Washington State, British Columbia and Alaska, which feed almost exclusively on salmon. 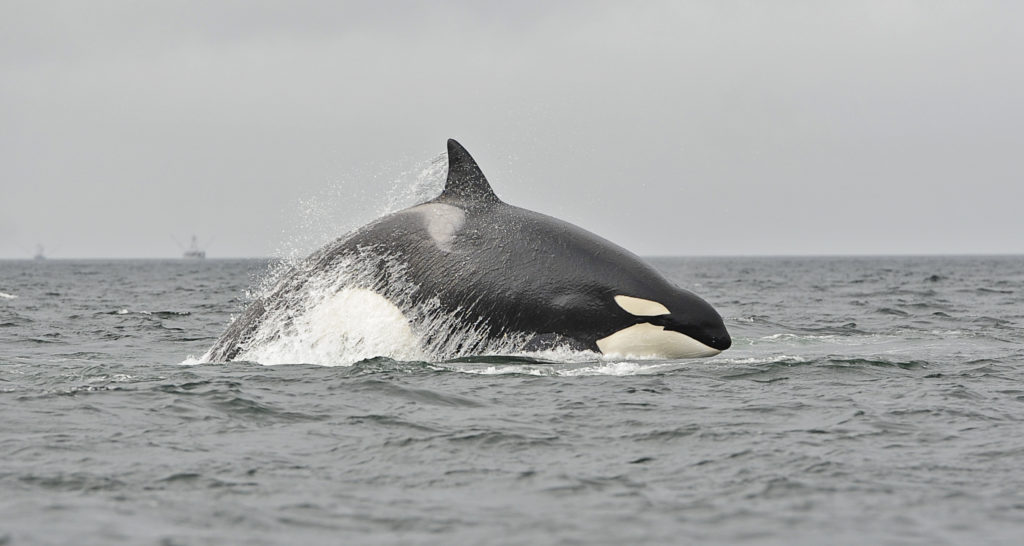 Guest can enjoy whale sightings, like this Transient Orca spotted near the Clubhouse.

No one understands how these two distinct types of whales developed, but marine biologists, including the late British Columbian researcher, Dr. Michael Bigg, have theorized that they have been genetically separated for over 100,000 years. Physically, the two types are very similar but there are some differences. The top of the dorsal fin of Transient Orcas tends to be more pointed than that of Resident Orcas. Less obvious, the saddle patch (the grey pigmentation along the side and behind the dorsal fin) is further forward on Transients. 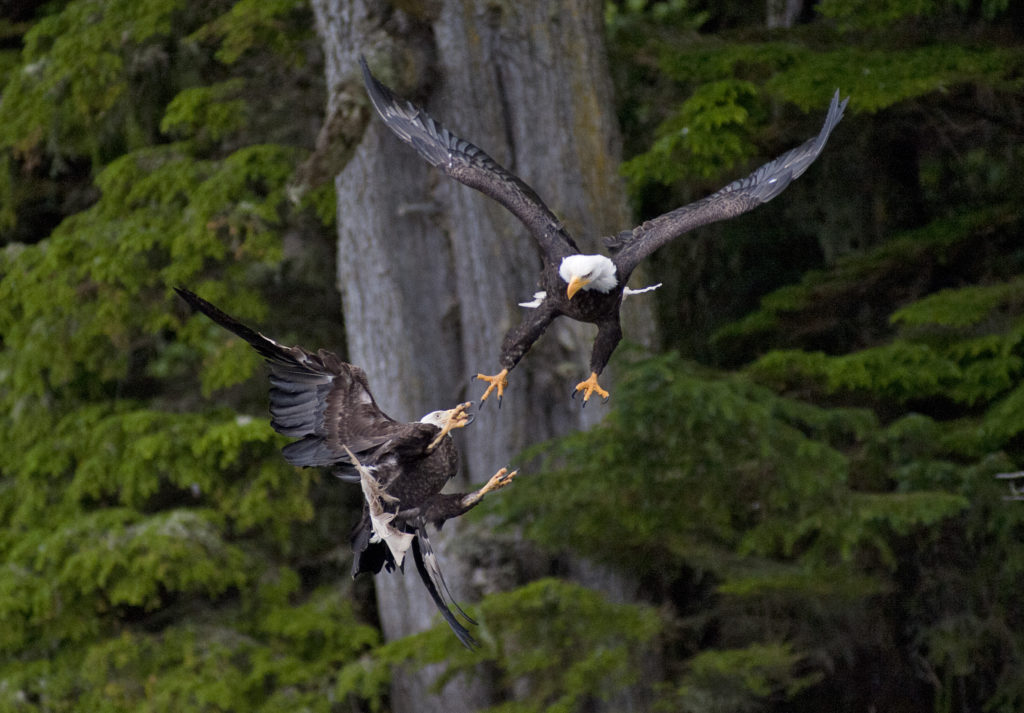 The stunning archipelago of Haida Gwaii hosts an abundance of wildlife, guests can look forward to numerous wildlife sightings throughout their Far Beyond experience.

General Manager Jordan Knight and his team are looking forward to welcoming new and annually returning guests to The Clubhouse, including our many long-time American friends, who will return in pre-pandemic numbers this coming season. Trust us folks, we missed you, and we hope you will be impressed by the changes to the back deck area, featuring the addition of new fire pits and an expanded roof under which to enjoy “après-fish” cocktails in any weather.

As an aside, the pizza oven will again be put to good use preparing piping-hot pizzas for delivery to hungry anglers on the water. 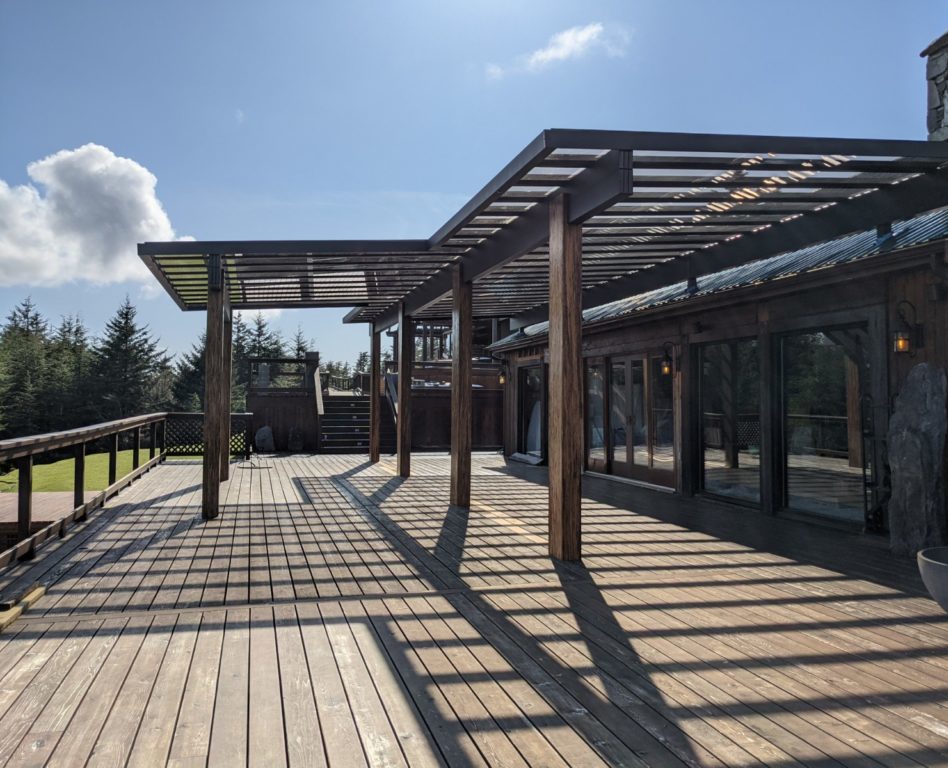 The guests who missed us the last few years will love the renovations to the deck. Guests can now spend more time outdoors taking in the stunning views of Parry Pass. 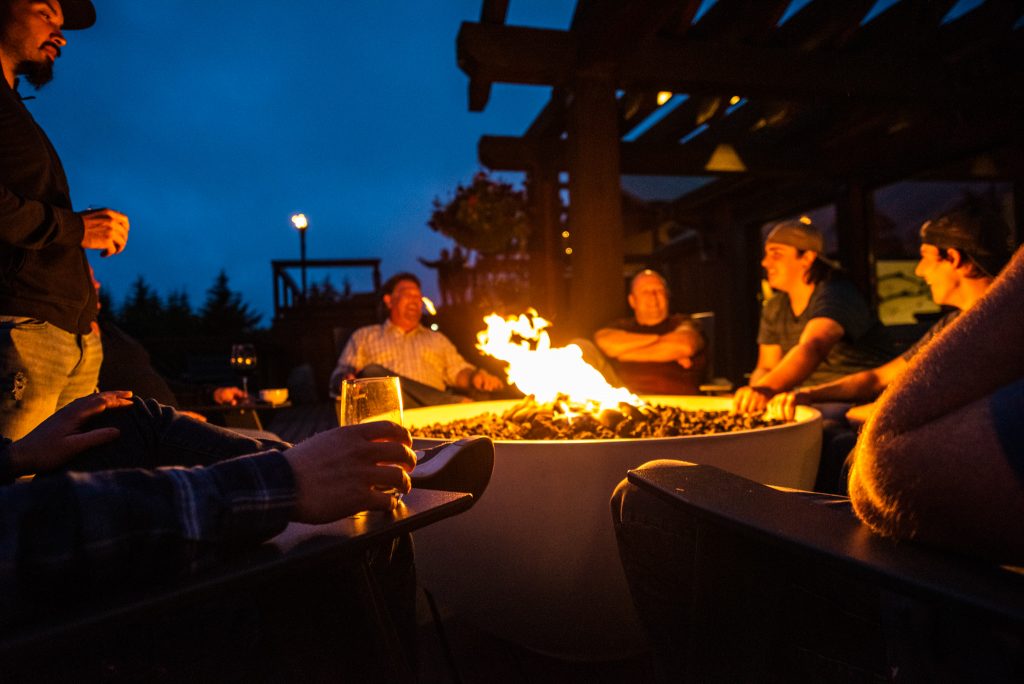 Relax with friends and family while sharing fish tales from the comfort of the fire pit.

A number of new faces will be on hand in key service positions at The Clubhouse this season, including newly appointed Executive Chef Blaine Robinson. With almost 20 years of experience, Chef Blaine has refined his passion for using seasonal ingredients and mixing classic flavours with modern techniques. Blaine returns for a second season at The Clubhouse, where in 2021 he played a key role to maintain long-held traditions of quality and creativity under former Executive Chef David Leeder. 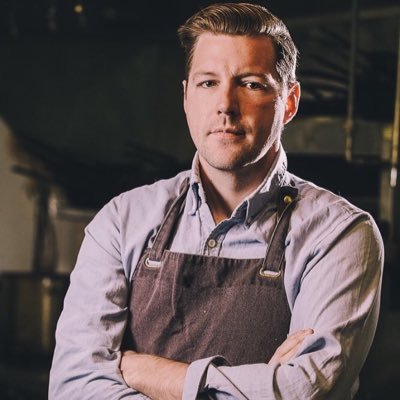 We are thrilled to welcome back Blaine Robinson in his new role as Executive Chef of The Clubhouse.

In her new role as House Manager and Sommelier, Dawn Schultz brings almost two decades of experience in every facet of restaurant operations and management. A certified International Sommelier, she has won numerous industry awards, including Wine Spectator’s Award of Excellence, and looks forward to refining the house wine offerings at The Clubhouse and enhancing its extensive reserve collection. 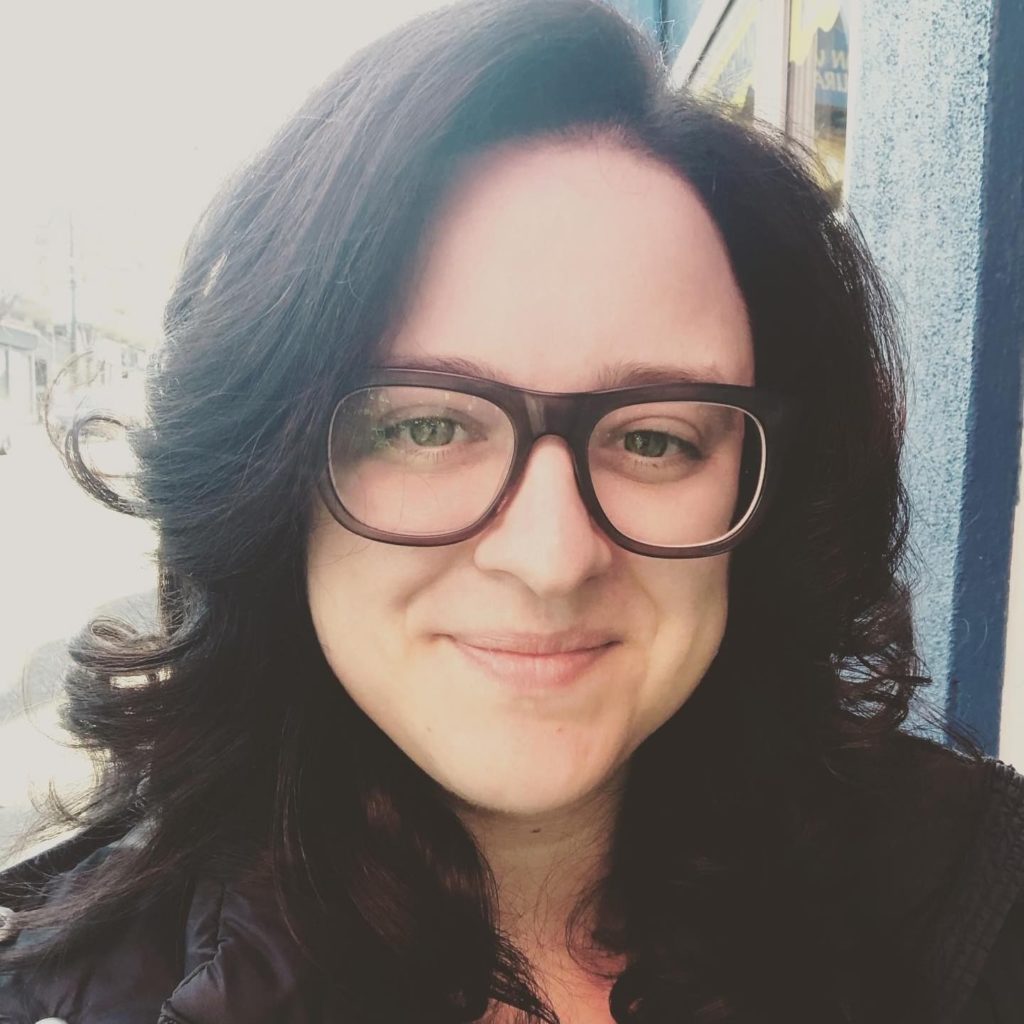 We are pleased to announce the addition of Dawn Schultz to The Clubhouse team, her unique expertise as a Sommelier is the perfect addition to to an already exceptional dining experience.

The Clubhouse has elevated the self-guided program this year through the addition of Alex Kerr as Fish Master. The all-new position is dedicated to ensuring an optimal experience to those who prefer to go it alone on the rich waters of Langara Island. An enthusiastic angler, Alex will maintain contact on and off the water to ensure boats and equipment are prepped, provide daily information on weather and tides and pass along the latest intel from the guide crew. 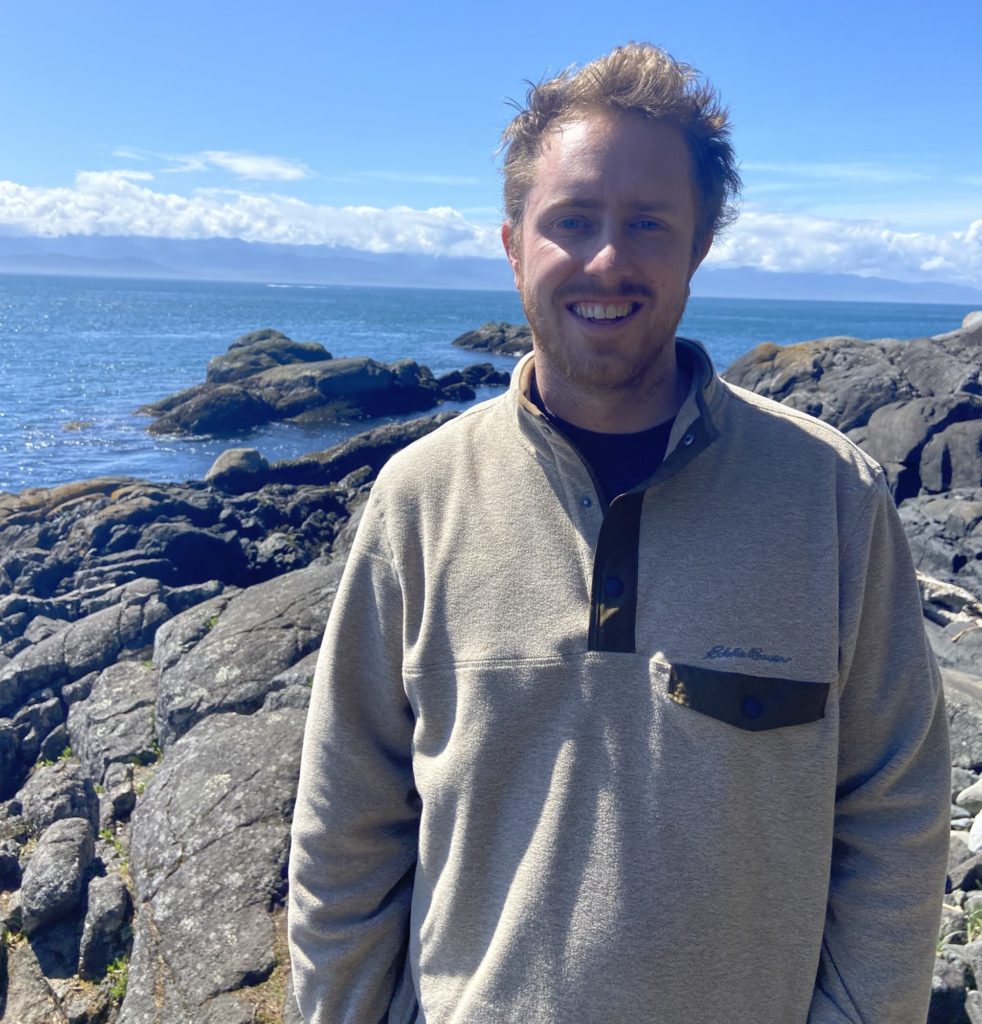 Self-guided guests can expect an elevated fishing experience with the addition of Alex Kerr as the first ever Fish Master at The Clubhouse.

Alex will work alongside newly appointed Dock Manager Chris Hauk, who brings years of experience as a team and project manager, along with a lifelong passion for fishing and “all things boats.” Although they often work behind the scenes, Chris’s team members play a mission-critical role in overall service delivery. Not only do they ensure safety and efficiency for all dock users, but they also clean and process your freshly caught fish to ensure a safe trip home. 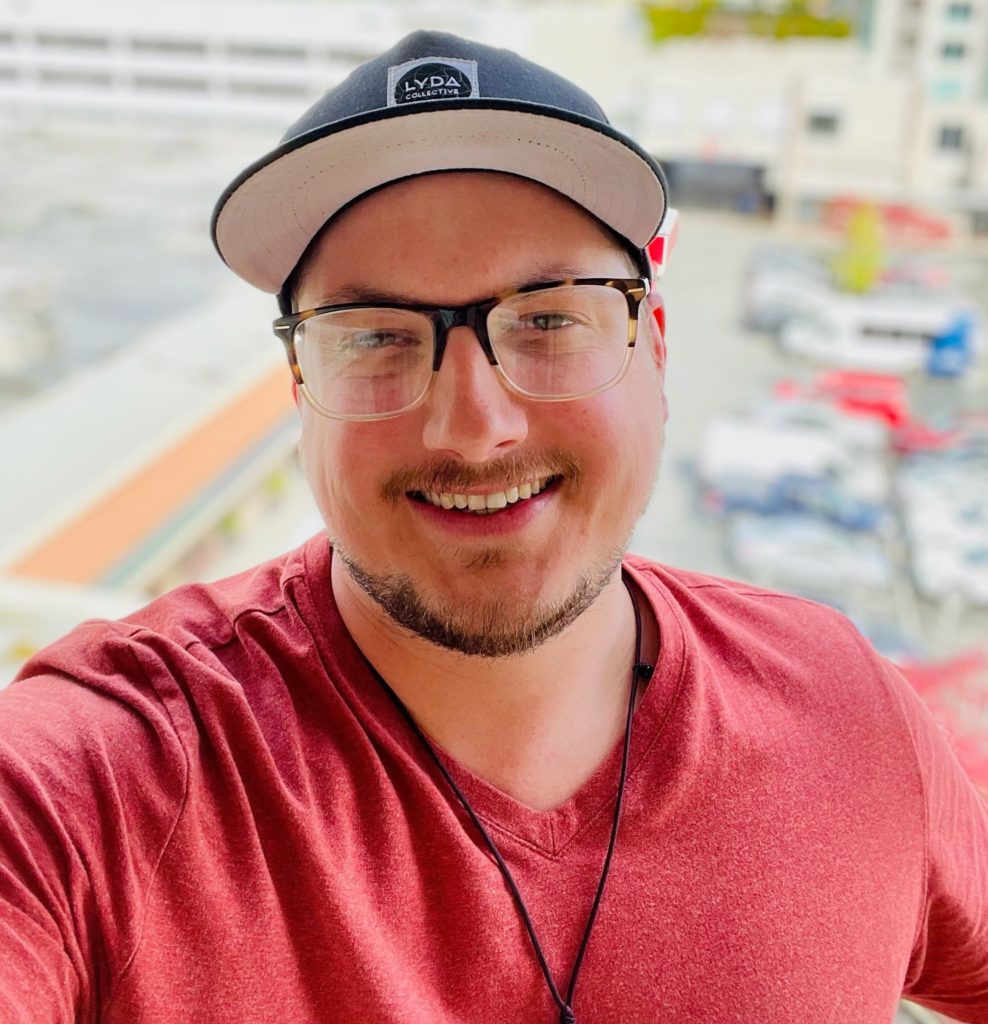 The Clubhouse is excited to welcome Chris Hauk into his role of Dock Manager.

Meanwhile, down Port Louis way, General Manager Shawn Crawford returns for a second season at The Outpost, as does returning House Manager, Vicky Smith. The sold-out status of The Outpost points once again to pent-up demand on the part of a loyal following who hail from both sides of the Canada-USA border.

There will be many familiar faces on the dock as The Outpost welcomes the return of a strong veteran guide crew. Their fleet of 22-foot Boston Whalers have all been fitted with new angler seats to ensure comfort and new Yeti coolers to ensure guests have a day-long supply of ice and a place to keep everything fresh, including fish! 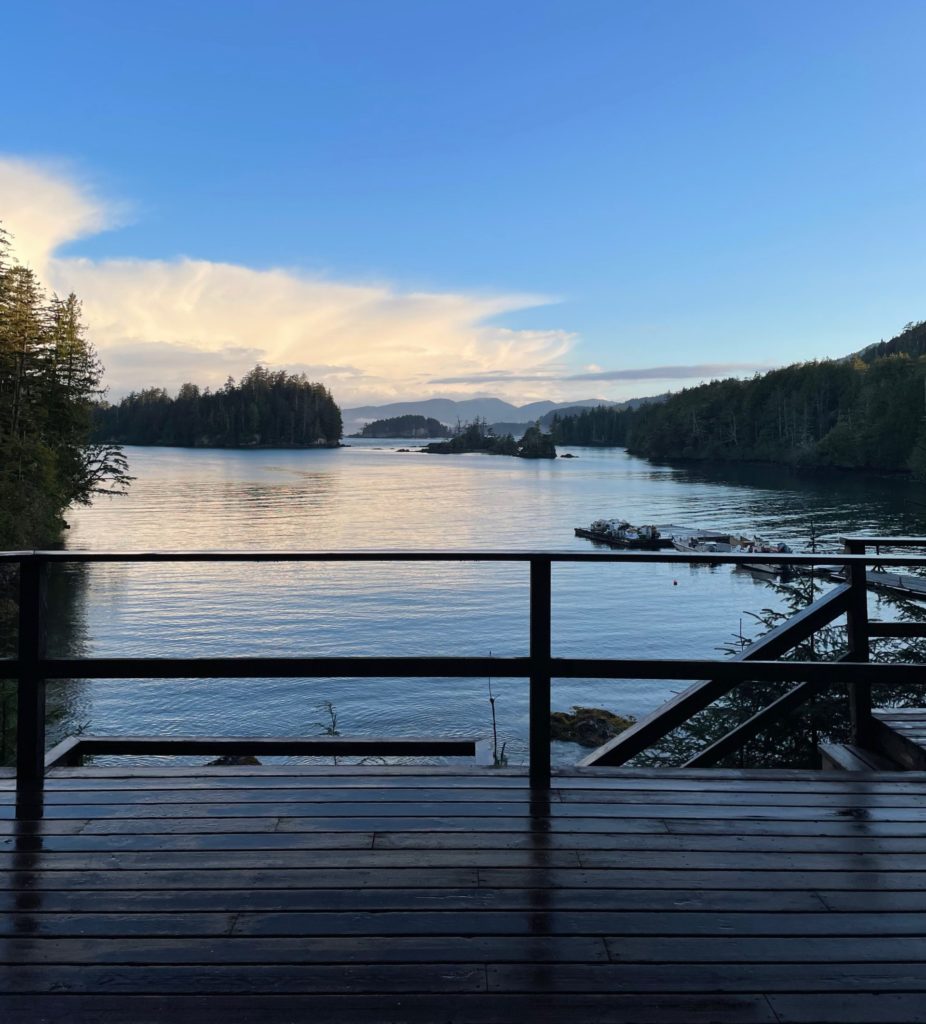 A beautiful 6:30am start to the day at The Outpost, as our team awaits the arrival of the barge to Port Louis.

There will also be a new face this season at The Outpost, that of newly appointed executive chef, Stjepan Balen. Trained in classical French and Italian cuisine, Chef Stjepan honed his skills in the fine dining scene in Ontario and British Columbia at King Valley Golf Club and Sun Peaks Grand Hotel. He now divides his time between Haida Gwaii and the alpine landscapes of Northern British Columbia, bringing his unique style to The Outpost and to guests of Northern Escape Heli-Skiing. 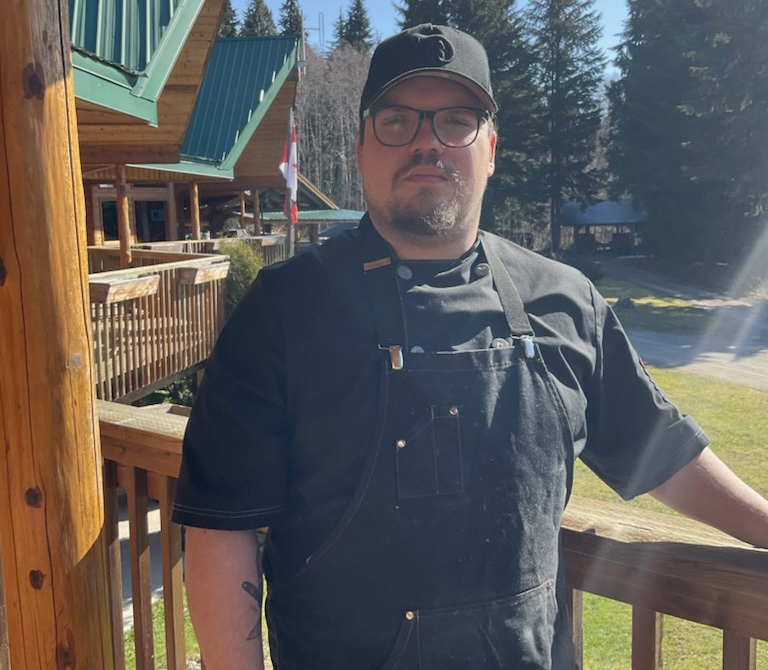 The Outpost is excited to welcome Executive Chef Stjepan Balen to lead the culinary team.

The special events calendar has some enticing opportunities once again this season, beginning with the perennially popular David Hawksworth & Friends Culinary Adventure, July 10-14. (Sorry friends, this one sells out fast, and such is the case for this year.) 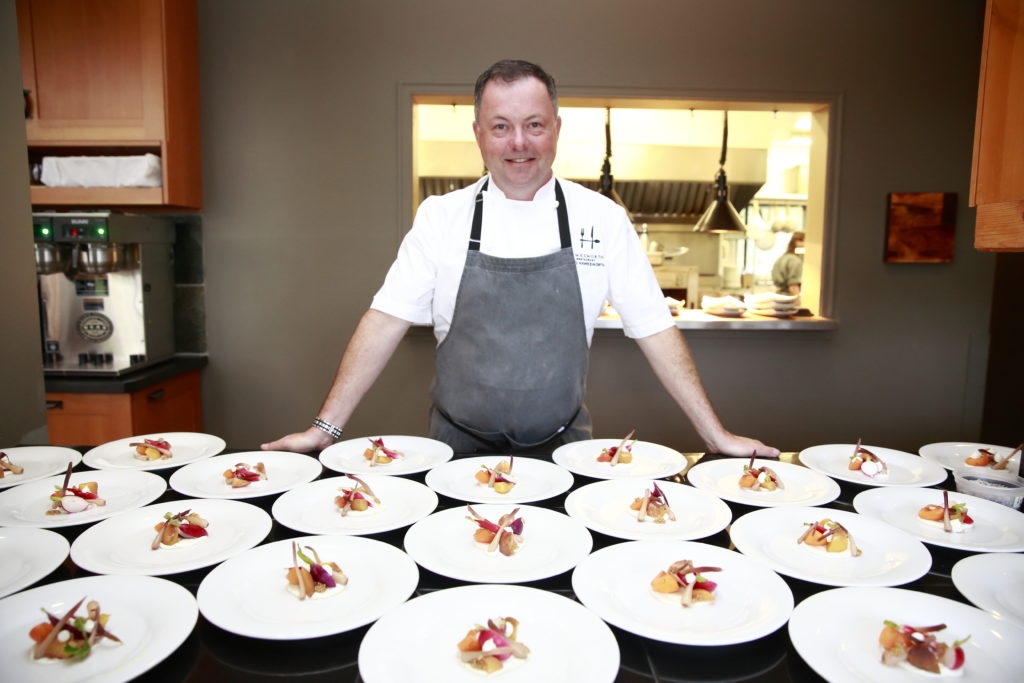 There will still be lots cooking on the back deck at The Clubhouse later in the year, with the Back Deck Bourbon Barbeque moving from its traditional slot in June to September 4-8. This year will feature award-winning barbeque from world famous pitmaster, Matt Pittman, with guests enjoying wide-ranging nightly feasts along with bourbon themed cocktails specially customized for the occasion. 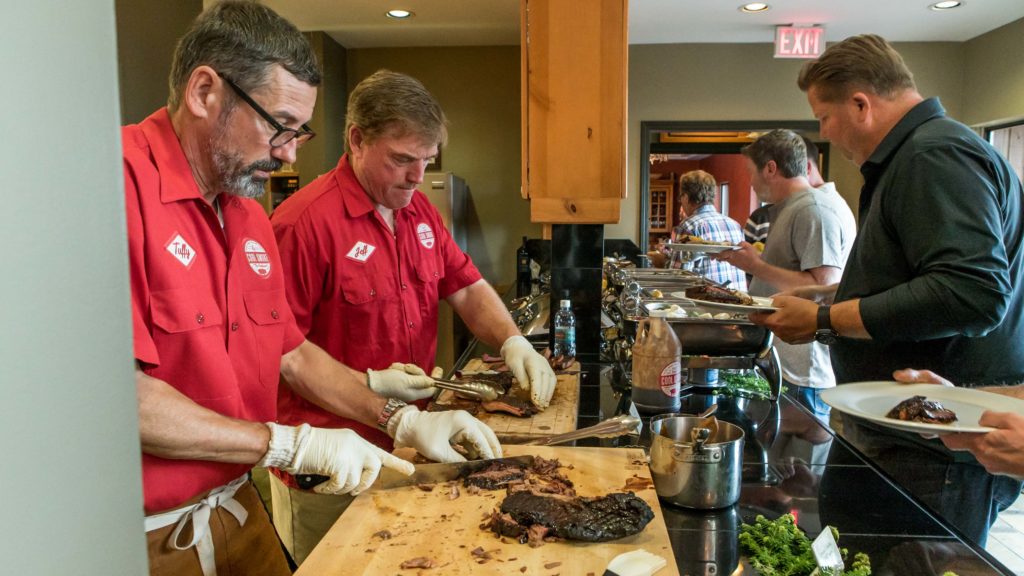 Guests can look forward to world class barbeque from our featured Traeger Grills along with hand crafted cocktails.

Adding to the September sizzle, some of Canada’s hottest rock musicians will be cooking up some tunes at The Clubhouse, both inside the lodge and on the back deck. Mick Dalla-Vee and Marc LaFrance, both long-time members of Randy Bachman’s touring band and veterans of the Canadian recording industry will be playing and singing September 1-4. Then fellow Bachman bandmate, Brent Knudsen and the multi-talented Dave Reimer, a founding member of Barney Bentall and the Legendary Hearts, will rock it out for the season finale September 8-11. 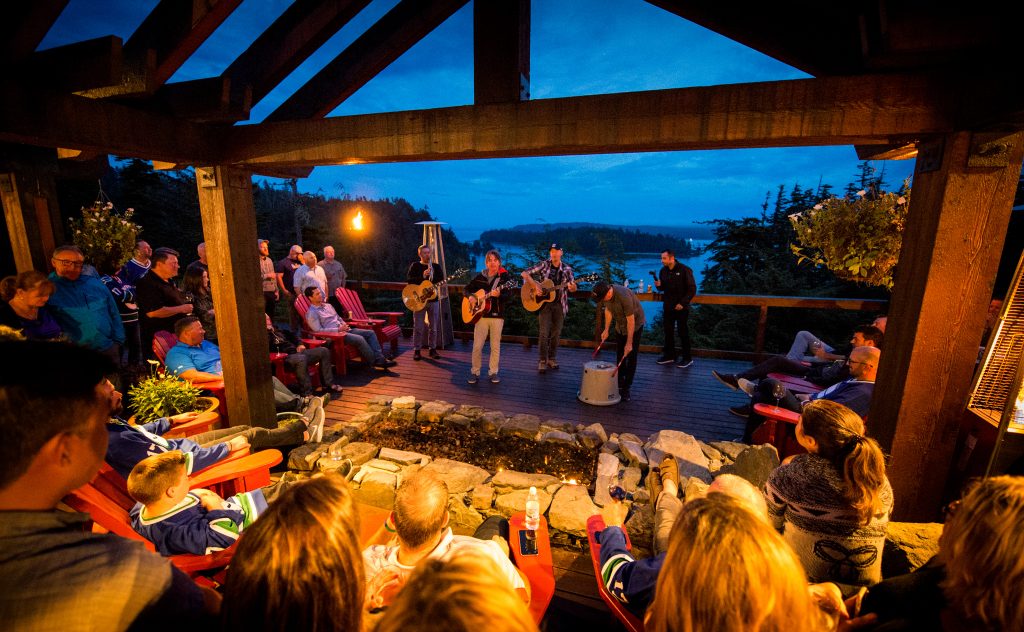 Concert scenery like no other, we are excited to once again celebrate summer with the musical stylings of our Far Beyond concert series.

A final word about health and safety of guests and staff. The West Coast Fishing Club will continue to comply with all safety protocols and requirements set forth by the BC Ministry of Health with respect to the Covid-19 virus. We thank you in advance for your support in helping everyone to enjoy a healthy and memorable experience while visiting our lodges, and the ancestral home of the Haida Nation.

Just a few more weeks to go before we push off for another summer of great fun in magical, mystical Haida Gwaii. Until then, stay safe and well friends.

Don’t have your adventure booked yet? Limited spots remain, call us TODAY at 1-888-432-6666 or click here to fill out an online inquiry. 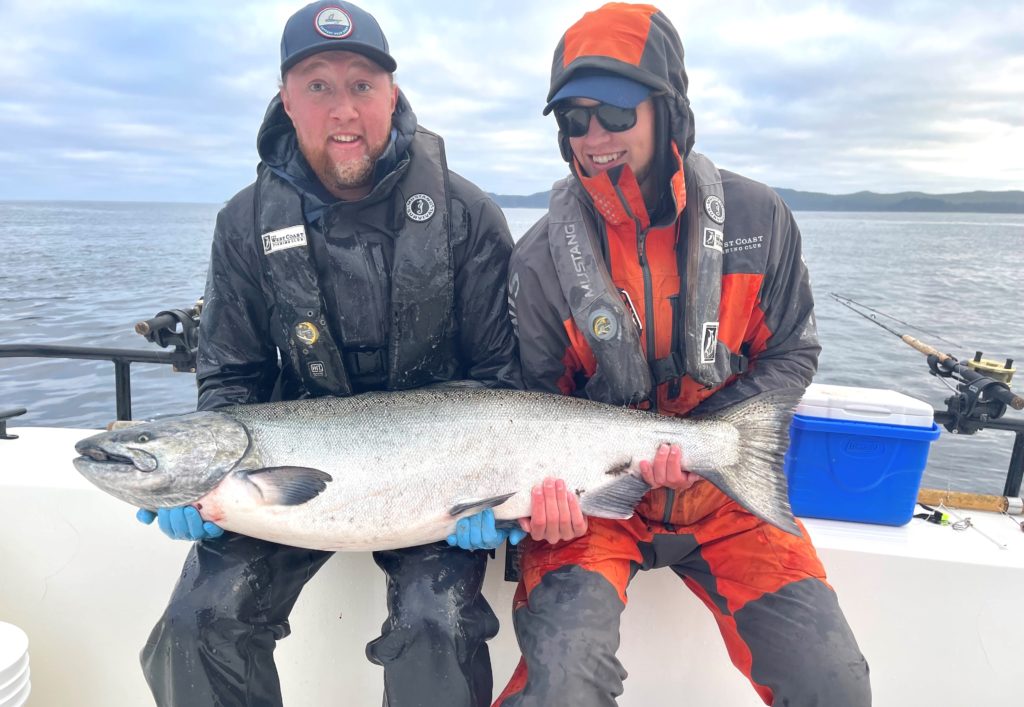