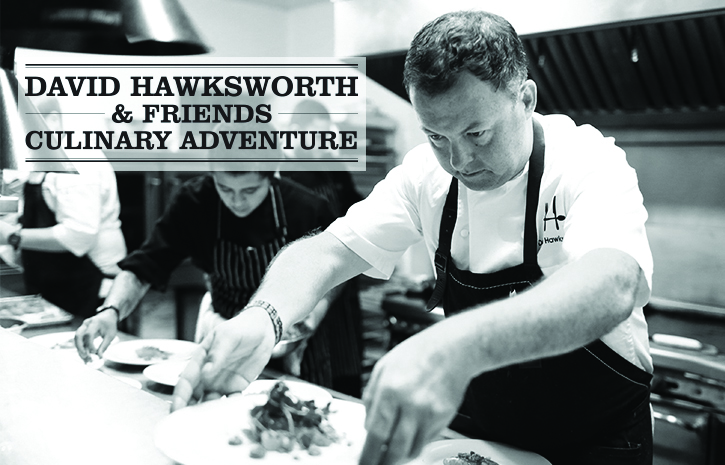 Award-winning Canadian chef David Hawksworth brings his signature style to his second Vancouver restaurant, Nightingale in 2016. Following on from the success of his eponymous Hawksworth Restaurant, Chef continues to lead the Canadian culinary charge as Chef Ambassador for Air Canada and founder of the Hawksworth Young Chef Scholarship.

Chef Hawksworth returned to his hometown of Vancouver in 2000, after a decade spent honing his skills in Europe at Michelin-starred kitchens such as Le Manoir aux Quat’ Saisons, L’Escargot and The Square.

Back in Vancouver he joined the team at West, in Vancouver’s South Granville neighbourhood, and during his time here he was entered into the BC Restaurant Hall of Fame as the youngest chef to receive this honour. Chef realized his culinary dream in 2011 when he opened Hawksworth Restaurant and Bel Café in downtown Vancouver to critical acclaim. Chef Hawksworth’s contemporary Canadian cuisine has received numerous awards; including winner of Vancouver Magazine’s Restaurant Awards Best Upscale Dining for four consecutive years; as well as Air Canada’s enRoute Magazine’s top three Best New Restaurants; and Maclean’s Restaurant of the Year.

Giving back has always been part of Chef’s philanthropic nature, such as his annual involvement with Fishing For Kids, in support of the Canucks Autism Network. Chef extended this philosophy with the launch of the Hawksworth Young Chef Scholarship in 2013. Each year Chef Hawskworth hosts heats across Canada, accompanied by fellow top chef and food critic judges, to find the culinary stars of tomorrow and award the ultimate winner with a life-changing $10,000 prize and international stage.

In fall 2015 Chef Hawksworth’s career continued to take flight when he partnered with Air Canada to elevate Air Canada’s in-flight and lounge offerings. His signature dishes are now exclusively featured on Air Canada flights in International Business Class, and in Maple Leaf Lounges. Normand Laprise was born in 1961 in Kamouraska, a small Québec village on the South shore of the St Lawrence River. His life on the farm followed the rhythm of the seasons and at an early age he developed his taste for products of absolute freshness.

In 1978 Laprise enrolled at the Charlesbourg Hotel School in Québec City. His first apprenticeship begins at the Relais & Chateâux La Cloche d’Or in Dijon where chef Jean-Pierre Billoux teaches him masterful skills, rigorous techniques and work with products of absolute quality. He brings back in his suitcase this savoir-faire and in 1989 he is hired as chef de cuisine at restaurant Citrus where he is very quickly noticed for his creativity.

In 1993 he opens with his associate Christine Lamarch Restaurant TOQUÉ! on St. Denis street in the heart of “Le Plateau” in Montreal. In 2004 TOQUÉ! takes a leap to the International Quarter at the gate of Old Montreal. A spectacular space in inaugurated at the Place Jean-Paul Riopelle where culinary art and street art live in perfect harmony.

In June 2010 Normand opens a second restaurant in the heart of Quartier des Spectacles of Montreal, BRASSERIE T!

Normand Laprise shares his time between his restaurant in Montreal and many capitals in the world of international gastronomy – Tokyo, Bangkok, Hong Kong, Paris, Copenhagen, Sao Paulo, Cancun and others. Throughout the year, he has hosted big names like Anne-Sophie Pic, Testuya Wakuda, Xavier Pelliver, Daniel Boulud, Massimo Bottura, Maura Colagreco, Luis Andoni and Michael Rostand.

He has received the Order of Canada and Order of Québec for his culinary work. Studies at the Dubrulle French Culinary School and a three-year apprenticeship at the William Tell led to roles at Bishop’s and Le Gavroche. Renaerts cooked for celebrities and royalty at the Fairmont Waterfront Hotel and Fairmont Hotel Vancouver and further honed his skills in the award-winning kitchens of Bistro Pastis and West. He later accepted executive chef positions at the Crown Plaza Hotel Georgia and Metropolitan Hotel, home to the acclaimed Diva restaurant. Became Chef and owner at Fraiche & Beachside Forno in West Vancouver & Opened Pier 7 in North Vancouver.

Recognition for his distinct, innovative approach to cooking has followed Renaerts throughout his career. He has garnered accolades for numerous regional and international competitions and was named a ‘culinary talent to watch’ by Vancouver and City Food magazines, and the Province newspaper. He has also earned Best Northshore Restaurant since moving across the bridge to West Vancouver.

A love of wine inspires Renaert’s cuisine Dino found time to attend the sommelier program with the International Sommelier Guild in 1998. He graduated second in his class in 1999 and became the first chef in Canada to be a certified sommelier. In 2001 Dino was invited to the Sommelier Summit in Sonoma, California, and replaced Charlie Trotter as the chef speaker on a prestigious panel including Larry Stone. Traveling to wine country at home and abroad for the past 17 years and working closely in a collaborative approach with his colleagues on his wine & food programs has been a passionate endeavor. Renaert’s expertise in oenology earned him the runner-up Sommelier of the Year award at the Vancouver International Playhouse Wine Festival in 2006 and 2010. Born in London, raised in Sydney Mark has over 30 years of experience in the hotel restaurant and wine business, fifteen of those as a Sommelier.

2001 he was named Sommelier of the Year at the Vancouver Wine Festival and also won the Spirited Industry Professional in 2014.

As a Department Head and instructor with the International Sommelier Guild he was instrumental in the on going development of the curriculum and has taught classes in Vancouver, Seattle, Portland, San Francisco, Los Angeles, San Diego and Las Vegas.

In addition he developed a wine education and restaurant etiquette course for Simon Fraser University Global Assest and Wealth Management MBA program and is currently studying for the theory section of the Master of Wine having passed the rigorous tasting examination. Rob’s interest in the food industry began in high school when his instructor told him that he made the best quiche lorraine she had ever had and that he should become a chef.

From there, Rob got a job as a dishwasher at his mother’s friend’s pub when he was 15. It didn’t take him long to get to work in the kitchen. At 16, he was working full time as a chef and going to college.

Rob’s first job in a big kitchen was at Woburn Abbey, owned by the Duke of Bedford. On his days off, he would work with the Duke’s personal chef, Graham Newbould who was also the personal chef to Princess Diana.

Newbould was the first chef that convinced Rob to make something of himself by moving up to a high-end kitchen. So, off he went to Lucknam Park in Bath. It was at the Michelin-starred kitchen where Rob would learn true discipline and hard work.

After deciding to take the next step in his career, Rob went to run his first restaurant in a hotel in Wansford just outside of Peterborough. It was there, Rob received his first red rosette at the age of 21. He also met his girlfriend there, which brought him to Canada. After arriving in Vancouver, Rob soon landed a sous chef position with Hawksworth Restaurant. Whilst at Hawksworth, Rob followed the mentorship of Kristian Eligh. Eligh not only showed him new techniques, but was instrumental in taking Rob from a section chef to a manager. Under Eligh’s wing, Rob matured enough for David Hawksworth to take notice and give Terry Cowan, The Clubhouse Manager a recommendation for Rob’s first Executive Chef role.