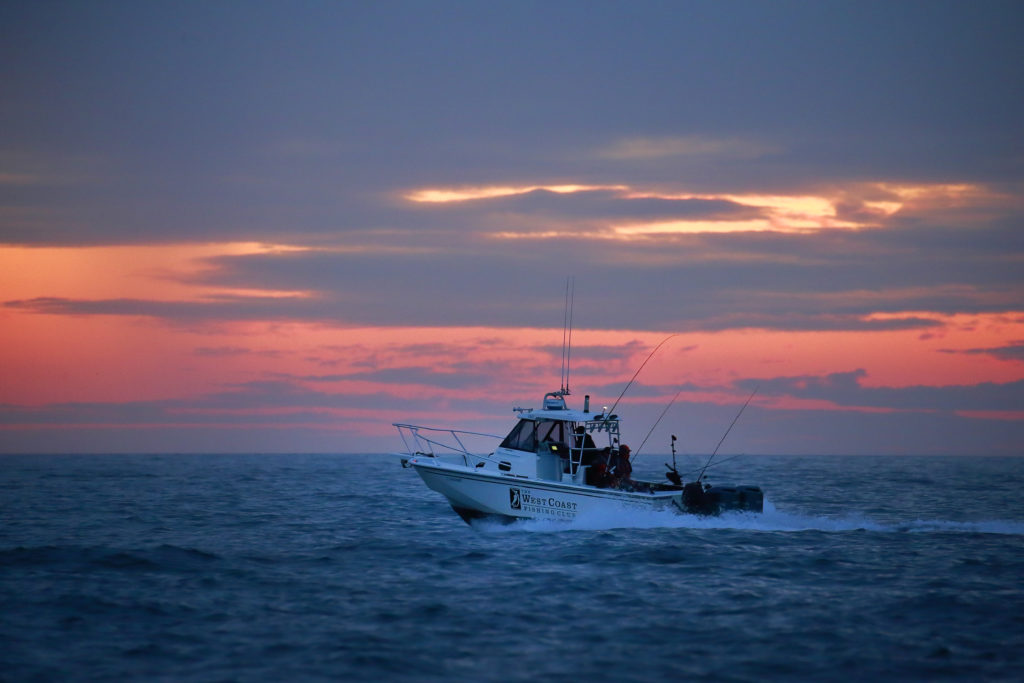 Returning to The Clubhouse

Prior to departure last week, I calculated that it had been almost exactly 1000 days since I had last set foot on Langara Island. After such a prolonged absence, I couldn’t help but wonder what to expect in the wake of various global goings-on. Would the experience be the same after a constellation of pandemic-rooted supply chain issues, worker shortages and prolonged border restrictions?

Would the fishing be as good as it had been on the overwhelming majority of 20-odd previous trips? I will come back to this subject, but first let me share honest observations of a visit to The Clubhouse in the early days of the 2022 season.

It began on the tarmac. Gone was the 50-seat turbo prop that had hitherto transported guests to and from Masset. In its place was an 80-seat jet that was roomier and noticeably faster, shaving about 30 minutes off the trip each way. A representative of the Club, Denise, was on board to answer questions (there were a few) and to smooth out any issues (there were none, save for an affable chap named Denny waging a digital skirmish with the parking meter outside the terminal, but that doesn’t count).

The atmosphere before, during and after the flight was like a return to summer camp. It was the first time since 2019 that everything was, for the most part, back to business as usual, with The Clubhouse operating at full capacity and the full-fledged and unimpeded return of countless American friends.

Many familiar faces among like-minded folk from both sides of the Canada-US border, and much light-hearted catching up amid the heady excitement of returning to The Clubhouse. And as always, an eclectic array of personalities that would inspire humorous and often fascinating conversations in the days ahead. 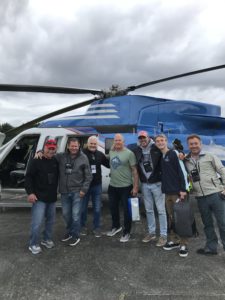 All smiles for the Garske group as they eagerly await their chopper ride to the lodge.

We were warmly welcomed off the helipad by wide-eyed young people who demonstrated expertise, personality and commitment at every turn. The deck had undergone massive renovations that featured glass roofing, outdoor dining areas, additional fire pits and torch lights. Carefully arranged planters and hanging flower baskets complimented new outdoor furniture that would lure guests in the days ahead to gaze in repose at the stunning view of Parry Pass, and waters that shimmered in the long hours of solstice sun.

And then…there was lunch.

At each table, servers presented eye-catching assortments of seared tuna, salads, charcuterie plates and artisan pizzas hot out of the wood burning oven. The kind of thing that lays waste to the conviction of waiting until dinner for wine, with a wide and carefully selected range of old and new-world offerings. My wife is not only my favourite fishing partner but also one who appreciates a properly arranged marriage of food and wine. We raised glasses in a toast to newly appointed dining room manager and sommelier Dawn Schultz, who had indeed taken a cellar that was already richly endowed and ramped it into one that could hold its own with any of Vancouver’s finest restaurants. 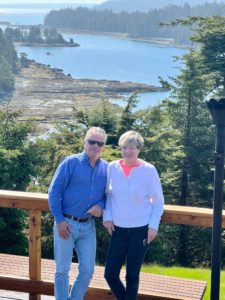 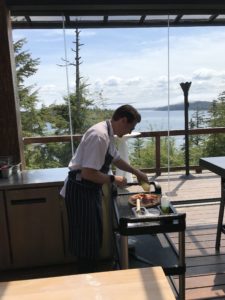 Chef Blaine putting the finishing touches on the pizza.

Down at the docks we met new fish master Alex Kerr, who is a beacon of assurance to self-guided anglers like us. Boat 30 and its gear were ready to go, and so were we. (Keep reading friends; the part about the fishing is coming).

The apres-fish hour featured exquisite appetizers and hand-crafted cocktails, along with the aforementioned wine and any other libation imaginable, with sophisticated servers expertly weaving among us and exemplifying the investment in a rich pool of human capital. Under lodge manager Jordan Knight, a culture of co-ownership was in evidence among staff, who seemed genuinely enthused by being part of something extraordinary in the industry, and that would be talked about by all who had experienced it. 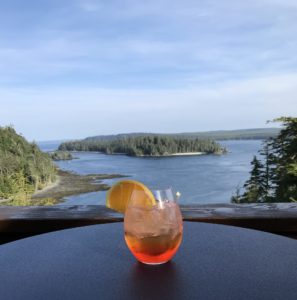 The perfect apres-fish cocktail and view.

And then…there was dinner.

The Clubhouse affords the most breathtaking view of the natural world that I have ever seen from a dining room. Even Chef Blaine Robinson agrees with that. It is the perfect stage on which he and his team present evening meals that feature the finest and most artfully presented offerings from both land and sea. Guests selected appetizers, mains and deserts from an extensive menu. Accompanied by a wide selection of house wine, each and every evening was an event to which we all looked forward. I can’t say enough, so we’ll leave it there. (Gentle reminder to Chef Blaine; Kim is still checking her email hourly for the ling cod velouté sauce recipe.)

And now, the fishing. I promised that these would be honest observations so I must say that, according to reports from the previous couple of trips, there were a few days that were eerily slow, but that changed the morning we arrived. Guests who had fished the morning of departure found many salmon that had apparently moved in over night. And that afternoon, we found them too.

Kim and I hit the highway off McPherson and promptly did business with Chinook salmon, with the best being an 18-pounder. So did pretty much everyone else, with the majority of fish being feisty teenagers, many of which were likely part of a predicted early-season run destined for the Columbia River. The following morning produced the same. We decided to head to Boulder-Gunia during the afternoon ebb tide and were not disappointed. We doubled up almost immediately and repeated the performance the following day. In between we caught and released several chinook salmon, including a 26 for Yours Truly in Fury Bay. Halibut too, both out west on the pick and on mooching rods in places not previously renowned for flatfish. 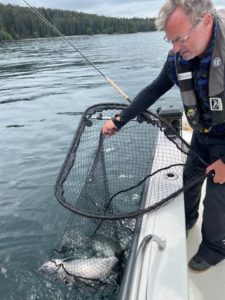 Self guiding is fun but tough when you double up on chinook salmon. Here is Don successfully netting both in one go! 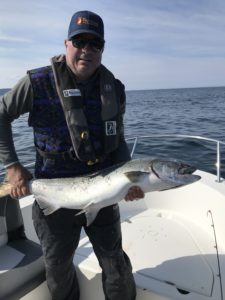 Greg Garske caught and released the only tyee with a 31 caught on a self-guided mission somewhere he wouldn’t disclose. Greg’s group included Ken Wilson, his former football team-mate at Eastern Washington University as well as their coach, the legendary and much beloved Dick Zornes, who coached the defensive unit of the BC Lions for a couple of seasons. It was a special time for Greg and his buddies, who helped Coach Z celebrate a birthday during the trip. 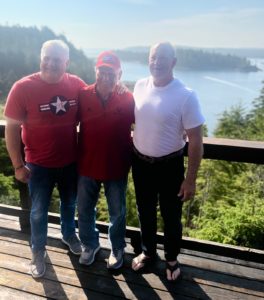 Throughout the trip my good friend Tony Adrian kept me posted on his excursion to The Outpost, where the bite was on in a big way. Numerous double headers were the norm, including several mid-twenties fish and a 31-pound tyee for Tony on day three, which he caught and gently released to continue its natal journey. Nice work Tony. You too Greg. Let those big fish carry on their way to produce more big fish, as per long-standing tradition at The West Coast Fishing Club. 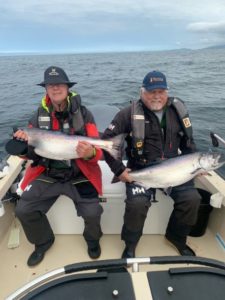 Paul and Tony after a double at The Outpost. 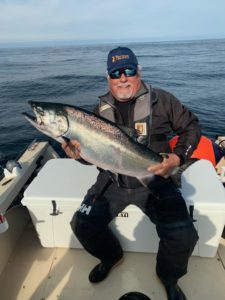 Tony rounds out his trip to The Outpost catching and releasing a beautiful tyee.

And so ends our early-season report from The Clubhouse, but with one final thought: If you’re in the business world, you likely know first-hand that the last two years and a bit have thrown some curves at us, however, good organizations, as has often been said, tend to emerge stronger from tough times. I submit that such has been the case for our friends who founded The West Coast Fishing Club and continue to operate it 34 years later. The truth is that this was one of the most memorable trips that Kim and I have ever undertaken to Langara Island, for all the aforementioned reasons, and also because at long last we were able to reconnect with good people from the United States of America. That connection with Canada’s best friends and neighbors is an important element in the overall experience. Jack, Kurt, Dusty, Greg, Ken, Denny, Holly, Coach Z, and all the rest of you – thanks for your time and friendship. Cheers too to the Edmonton foursome of Colin, Tony, Ron and Kevin who joined us at table three. 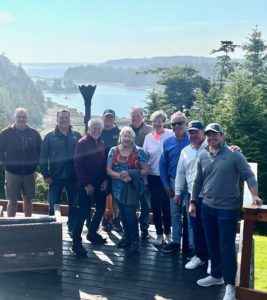 The table three guests and new friends – certainly a trip for the books.

In summary, it was unspeakably wonderful to congregate at The Clubhouse once again, to escape the current and recent realities, to breath again and to feel the marine wilderness with all of our senses. And to find a few minutes by ourselves to take a glass and gaze reflectively at the shimmering waters of Parry Pass. At just the right moment, it is the kind of thing that can produce an unexpected lump in your throat, as the revelation occurs that we may never know a greater privilege.