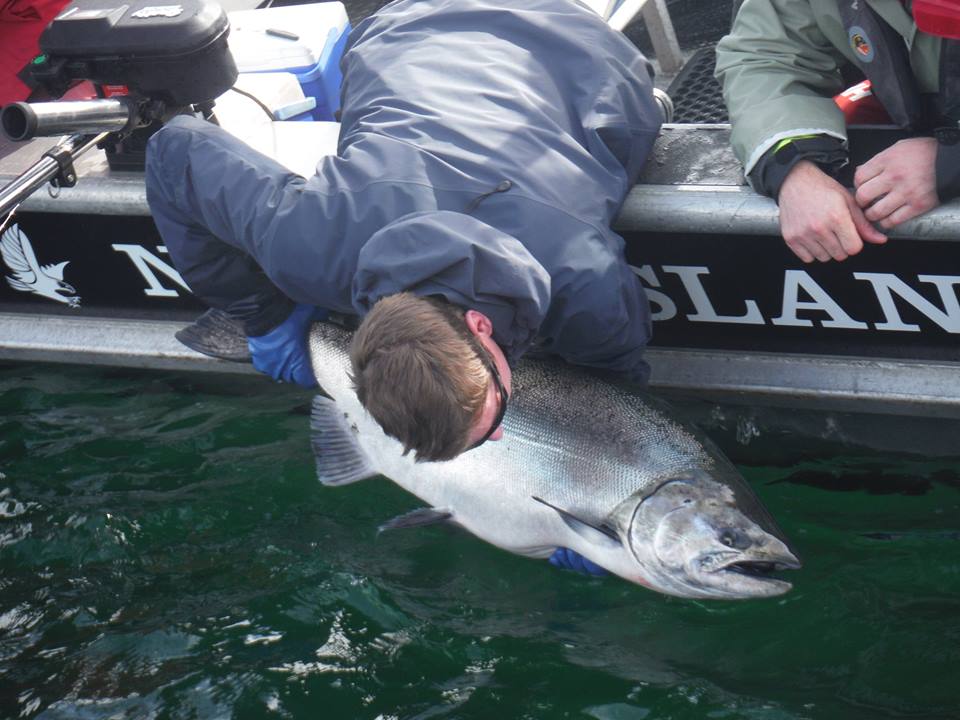 Biggest Tyee Of The Season Released At The West Coast Fishing Club: 47.5 Lbs

Langara Island is known for producing large Tyees. These big Chinook Salmon enjoy hanging out and feeding in the shallow waters that surround Langara Island from May through to September. With our lodges located right at the top of the migratory path as the Salmon head toward their natal streams, we put our guests in the ideal location to access these fish in great numbers and have the best opportunity to catch a trophy Tyee.

We are pleased to announce that this past week has witnessed a flurry of Tyees roll in, capped off with a 47.5lb release for North Island Lodge guest Ed Fox and guide Brent Gallacher (featured above). Always great seeing these big Tyees released back where they belong to continue breeding larger fish for the future gene pool.

Over the years, we have seen this influx of larger fish arrive throughout various times of the season from June through to September. It is very hard to predict when these fish will arrive based on the cycle year, water conditions, bait and weather. The good news is this past week has produced a tremendous amount of larger fish (over 20 Tyees) that we are very excited to share with you. Let’s hope that this trend continues and look forward to a productive August/September fishery. * 42lb Tyee for Angler Nicolas Simon Jr. and guide Brent Gallacher that was caught and released in the pass. * Justin Foo with guide Mike Ross and a 40lb Tyee caught at McPherson Point on July 9. * Conrad Wangeman with a self-guided 43lb Tyee (45 inches long) caught at Gunia Point at the end of a beautiful day out on the water. We still have space available on select trips so be sure to call us today at 1-888-432-6666 or click here to make an inquiry online before it’s too late!