Get in on the action and join us May 28 to June 1 as we will once again kick off the 2017 season with the seventh annual SNC Salmon Derby. This has always been one of the most popular events on our schedule and is sold out well in advance of the start of the season. Besides daily prizes, the angler who records the biggest Chinook of the trip will win a return trip for two on any SNC trip during the 2017 season. Anthony Delatolla captured the 2016 title with a 31.77 lb Chinook, followed closely in second by Norm Pitcher with a 31.25 lb Chinook and Gary West, a first time SNC Salmon Derby guest, closed out the top three with a 31 lb Chinook. In addition to the fame and glory Anthony was awarded a return trip with us later in the season. Our tournament contestants have enjoyed great early season fishing for the past six years and we look forward to welcoming everyone back again for good times and spirited competition.

SNC Derby a Game of Ounces

For the sixth consecutive year, The Clubhouse season kicked off in a fiercely competitive manner with the Short Notice Club Salmon Derby, and when it was all over the difference between first and third place was less than a pound. The competitors had to work hard for their fish on day one as strong winds from the southeast relegated competition to the west side of Langara Island where Gary West boated a 27-pounder to take the early lead. The afternoon shift proved to be much more productive, allowing Dave Faulkner to take over the lead with a 28 off Lacy Island. Day two saw a bit more action and some larger fish, with the top three competitors all ringing the bell on the first Tyees of the season. * Boats racing out to the fishing grounds. No time to waste with a return trip on the line!

With winds a little lighter, day three saw the bulk of competitors move east to McPherson Point where an encouraging bite took hold in the mid-afternoon. In spite of a valiant effort by defending champion Dave Rishel and a Chinook just shy of 30 pounds, it was increasingly clear that the day-two leads would hold up. That meant that first place and a return trip for two later in the season went to Anthony Delatolla for a fish that was just under 32 pounds. Second Place and an Islander MR2LA reel went to Norm Pitcher for his 31.25, while third-place finisher Gary West’s 31 earned him a $200 gift certificate from The Clubhouse gift shop. 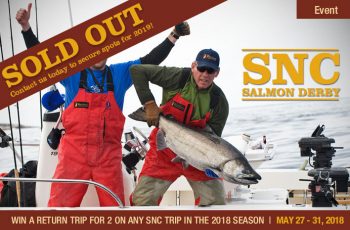 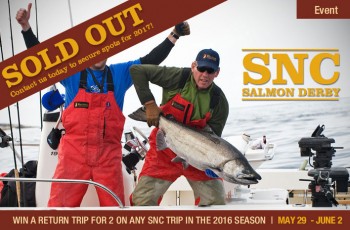 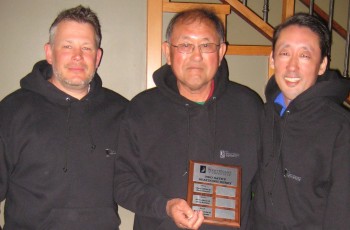