I just got off the water this pm and we found a very nice school of chinook in the teens up to the low twenties. We were angling off McPherson Point out in the deep and the down riggers were churning up countless fish in the 140 foot zone. Yes some of us were out near the trollers, but plenty action, lots of bites, and no wildlife, despite a rougher sea and a steady downpour. The fireplace and blankets are very popular tonight.

The last week in here has seen some very good fishing. Again, I am not mentioning the names of the many lucky anglers, but I do know the largest fish of the last trip was 48 lbs, released by guide Paul, out ten miles offshore. Paul was finishing his shift out there after grabbing his halibut, and of course it’s not how but more where you found the big wind, well played. We are still working on downloading the pics as I write this.

The first couple days of the last trip saw some better weather, and we all loaded up on chinooks and halibut. I was fishing with the Garske girls again, annual trip with with father Greg and this time, Nancy his wife made the trip up, despite a broken foot thanks to her horse! That’s another story. Below is a photo of the mother and daughters with a nice low twenties chinook Lauren reeled in out at Andrews! The Garske girls. A low twenties for Lauren Garske Aug 21 off Andrews Point McKenna Garske with her 24 lb chinook, angled off Gunia point

We also did well on the halibut, releasing this monster Lauren cranked up, as well as the two keepers the girls are proudly showing off. Lauren’s huge 200 lb halibut release, what a back breaker this one was!

Overall a great trip, but for sure, the weather kicked our butts two of the four days. The trip 15 to 18 of August, was a wicked trip, the chinooks were biting steady if not on fire. The West Bank was hot in the afternoons, chinooks into the high twenties common. At one point we pulled out and moved to Cohoe Point looking for coho, and  yes, it was a chinook show there as well. The August run in here appears earthy and plentiful. Everyone was catching. A very happy Rob Mallinder with his 27 lb chinook A happy Toby Mallinder and his 27 lb chinook!

The fishing is steady and holding up for sure. We are starting to shift into the fall pattern with weather and our techniques. The Downrigger is a valuable piece of equipment now, as we are grabbing silver bright chinook salmon into the mid-twenties consistently deep on the highways. That said, don’t overlook a few tacks in close to shore at the usual haunts, there are chinook passing through these areas as well.

A final note, congratulations to Byron Aceman who has been trying for ten years to catch and release a tyee. Well this was his second visit this year, and he did it! Two tyees, largest 33 lbs. Dan was the guide, well played Byron! Korey coaching the guides, guides soaking up all his tips! 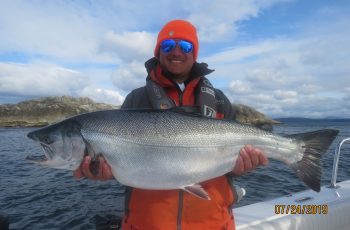