A foggy start to the day here at The Clubhouse, so with a few minutes in between changeover of guests, here goes a fishing report for the last week of fishing here at Langara Island.

We have enjoyed some hot fishing for both Chinook and Coho, although things have recently cooled down somewhat. Chinook fishing was insane for about ten days and a few size large Chinook were released. Below is one of the largest specimens released by guest ANDREW O., guided by Brent, out at the old FISH BOWL. 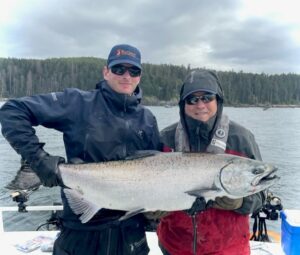 That is one long fish! Of course measured and released, below Brent just doing that.

Note the tote for revival, the fish is quickly revived inside the tote of water and safely released once measured. The tyee turned out to be 43LBS. Yes, we divide by 800! No 750 here at The Club. It seems the new normal is to lower the standards of what a tyee is haha. We take the overall length, squared by the girth, and divide by 800. ALWAYS. If the measurement is taken carefully, the fish taped at the widest point without wrapping the dorsal fin, you will get an honest assessment of your fishes weight. It’s accurate, promise. 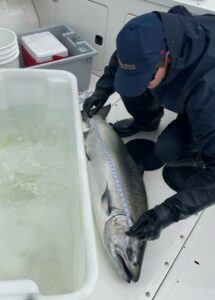 Another nice 40 was released in the same area, guest Anand S., guide Korey, had this fish quickly to the boat. 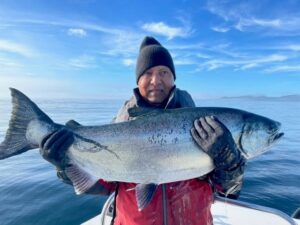 The weather could not have been more perfect! Thanks to the boys for supplying me with the pictures.

My boat was a little cool recently but I had a decent run with Staci and Mark E. With the help of Lucy, we found a 30lber for Mark on our first pass at GUNIA on a sunny early start, all alone and lion free. 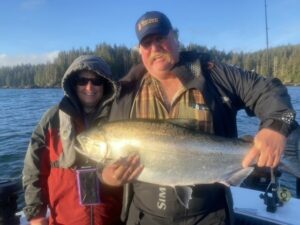 We had a great four days, with Staci earning top rod status before she finished the trip. Our last afternoon Staci landed four Chinook in the mid twenties out at the Bowl, and the boat had nine fish 18 to 26lbs.

Of course Lucy did her part cheering on every hookup, and providing angles whenever the camera was pulled out.

And of course we need an action shot of Staci battling the rougher conditions right in the Bowl, playing a mid twenties Chinook. 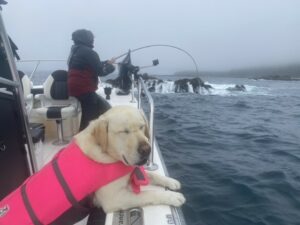 Lucy looks slightly seasick but no, she’s on the ball. 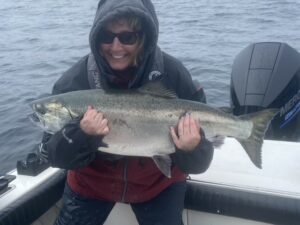 Success…a 26lber to finish up with! And released, way to go girl.

So here we are, getting into later August and now once again spreading out looking for the next hot bite. The Bowl is still producing, but the bite period seems shorter now. Not much early morning action there for us. DJ Reports his spoons are clicking here and there, the brass one now his weapon of choice. 55 feet he barks at me on every pass. Pete had a tyee in the Bitter Bowl, I recall 31lbs, taken at 6:45 to save his shift.

The boys fishing out west for Halibut had some good trips if the tides were playing nice. We have had some monster 16 foot tides recently…tough to drift fish on the hali. A good way to lose many many two lb balls, pick your tides! The Halibut recently seem to be 80 cm to 89cm…which has a limit of two fish, or you can take one halibut 90 cm to 133 cm. Tucker was on the overs lol, THRUMB area was mostly producing monsters. Ask at the dock if you’re self guided, we can point you in the right direction.

The Coho are still here in some numbers, but cooled down a bit. A mile out from COHO POINT you should find what you’re looking for, mostly 9 to 11lbs with the odd surprise.

The weather continues dry, very dry. Fog is definitely in the mix for the coming week if things continue this pattern. The winds are super warm. Bud reported he was scared on the trip in last night haha. Brent told him to just take his jacket off. That should be an easy fix.

So there you have it, fishing is decent, weather is hot, super muggy BUD thinks. I’m with him. How can a guide get tired of that? Below is my prize pic of my 6:30 am walk down to the dock. Just look at what we see a lot of days in AUGUST, here in Disneyland! 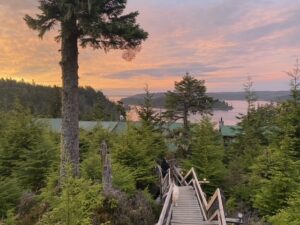 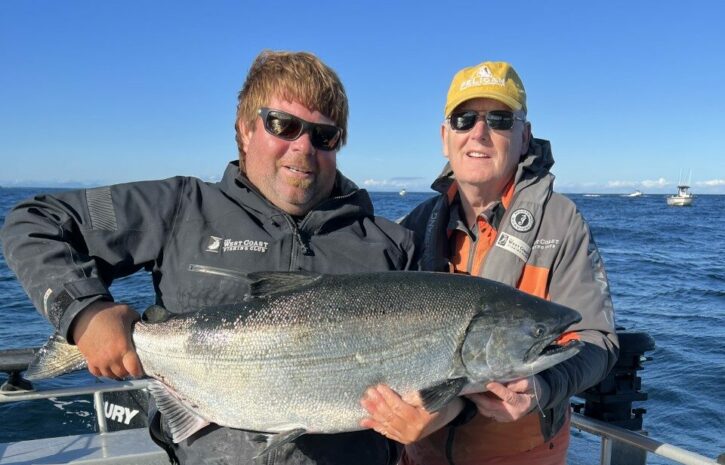 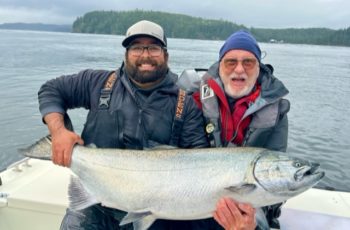 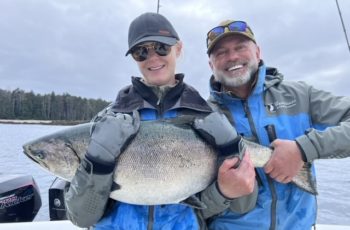 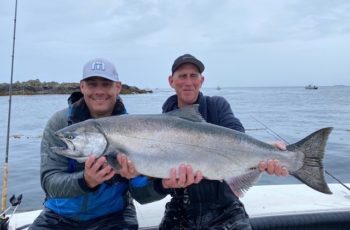 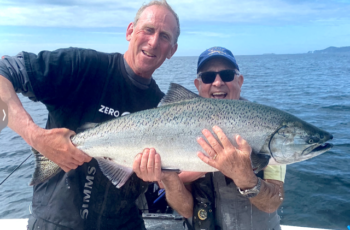 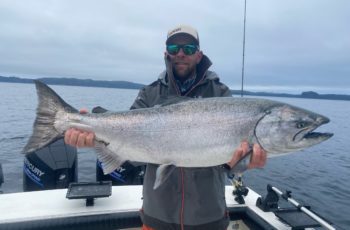