Hello again from Langara Island and The Clubhouse. We are now midway through our second trip of the season and the fishing continues to be very good here at Langara.

We opened on July 1 and the season started off with above average chinook fishing in all areas, from the pass to Pillar Bay, and right up the east side of Langara. Chinook 12 to 21 lbs were stacked in all locations, fishing from the surface to the depths, it did not matter. Lots of guides did well off BG, the largest fish a 45 lber which was released in Bruin Bay, by guide Austin.

There was a 33 lber wrangled in Boulder Bay, this fish guided by DJ. Not sure who the angler was. Boulder was hot, as was Gunia, again most fish high teens. That said I saw more than a few low to mid-twenties in the fish room totes. Every angler seemed to find a couple chinook to take home, the current limit which is one a day, two possession. The coho were somewhat plentiful, and they are in the six to eight lb range.

The first trip wrapped up with a handful of tyee and all anglers very happy with what they saw out there.

Below is a picture of some bubble feeding humpback whales that surprised me out off the EAST side.  I did see the large ball of herring under my my boat, and next thing you know, I had visitors, popping their heads up on all sides of my skiff. Quite a sight for sure, and I was glad I had the iphone with me for sure. 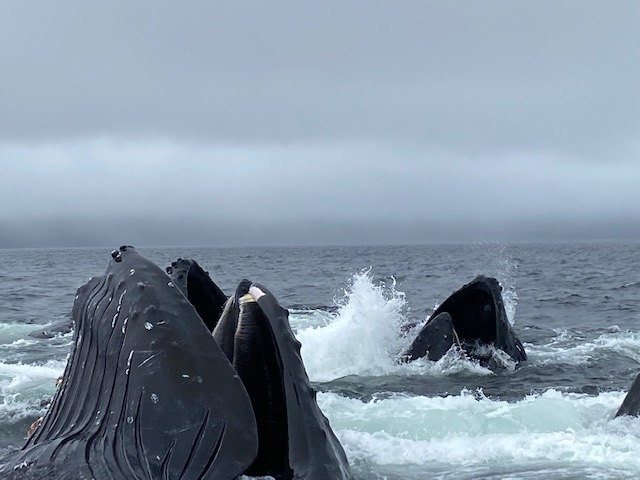 Humpback whales bubble feeding alongside my boat. It was an incredible show.

Our second trip is moving along and again another 45 lb chinook was released  by Austin out off POP OFF POINT!  I guess there are a few around for sure.  A few of the guides went in and did well, there seemed to be a snap in there,  most were high teens low-twenties, but the guides reported exuberantly that it was the best bite they ever saw lol. Photos will follow.

The  Northwest wind has been moderate to strong for days, wiping out most of the west side fishery. Brent has been pounding the REEF out front of the lodge with great results, a good average size in the twenties up to thirty pounds on the ebb. I pushed a little farther out to the West Bank, with Gary Sartorio, we had to cruise out in big water and fish in the swell, with a good chop on top making the angling a challenge. First pass up the wall we hit a decent chinook and that fish promptly released. Lines were set again and on the pass back bucking the chop and ebb current Gary grabbed a rod with a screaming islander reel, rapidly dispensing an arbour of 25 lb test. Lucy sensed a large fish for sure, adding to the chaos and excitement. We managed to turn the boat around and give chase, all the while the cartwheeling tyee frantically trying to escape.

We finally managed to get the fish along side and into the net, quickly aboard and into the revival tank. Below is a picture of Gary’s fish, recovering and soon released back  into the Bowel  to continue her travels. The  tyee was measured and at 42 x 27.5 she came in at 40 lbs. What a nice fish for Gary on his birthday, that’s two 40 lbers in two years, well played buddy! 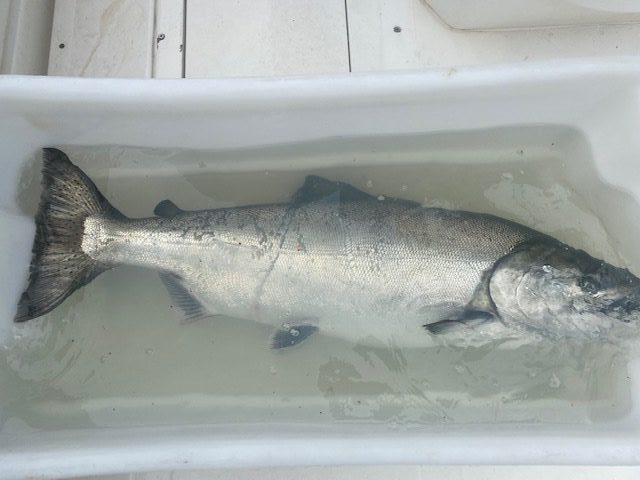 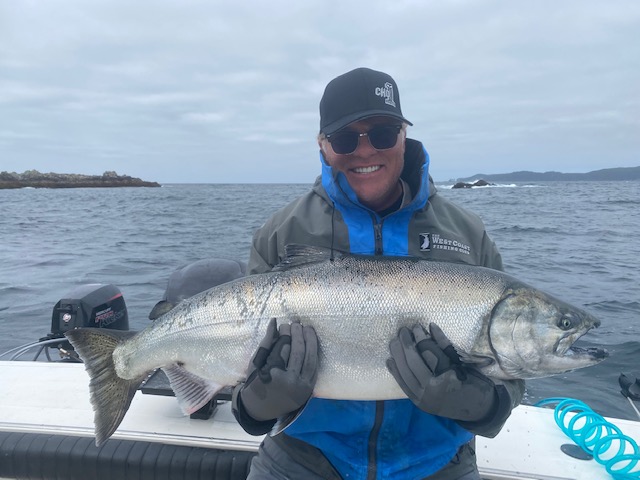 Gary Sartorio received a special birthday present in the form of a 40lb tyee! Thanks to Gary for releasing this beauty. 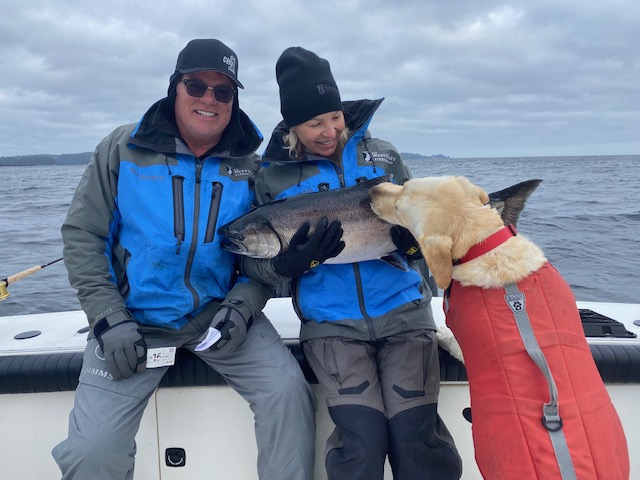 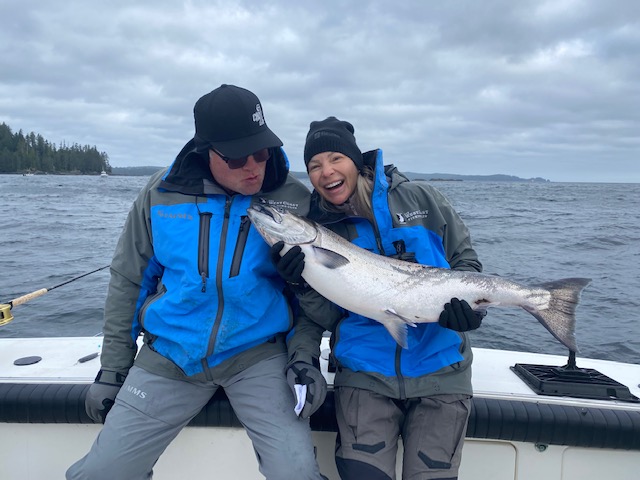 The winds look light for tomorrow, so we should have some west side reports. The halibut appear to be here, the coho are increasing in size weekly, and what can you say about the chinook fishing, it’s very good at the  moment.

Until next trip, good night from the Clubhouse and Langara Island. 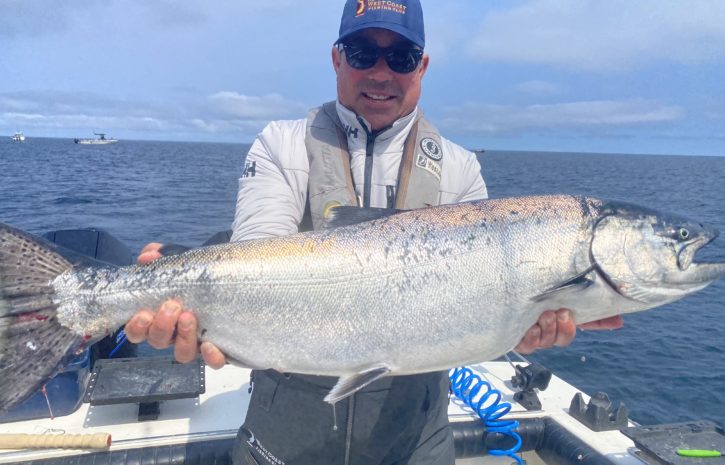 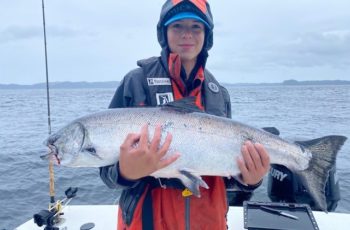 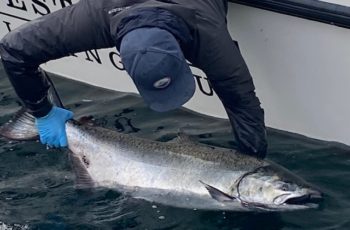 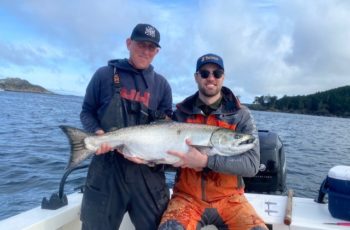 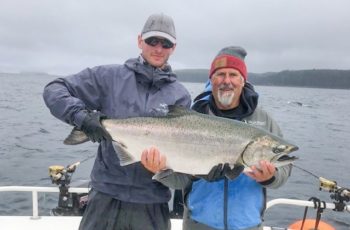 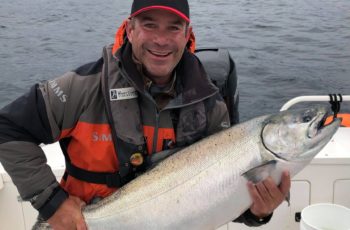