Last Sunday morning, it was hard to believe that the 2019 season was over. Weather wise, it was about as pure and pleasant as a summer morning gets, one that lured guests onto the deck of The Clubhouse to chat under azure skies, await their helicopters and gaze one last time at the shimmering waters of Parry Pass. A beautiful final morning at The Clubhouse.

It wasn’t until the flotilla of guide boats suddenly appeared, moving out in unison towards winter storage facilities in Masset, that it finally sank in. With horns honking and long v-shaped wakes trailing behind, they seemed to make it official. An incredible season of fun and fishing – 102 consecutive days to be exact – was officially in the books. Clubhouse boats headed to Masset on the final morning of the season.

Although the fishing cooled off in the final days of the season, you would never know it by the chatter and laughter throughout the lodge. Spirits were high among folks who had come from near and far for the inimitable experiences that abound here. The September to Remember trips had lived up to their promises, highlighted by live music and a unique form of camaraderie among people who refused to let go of summer without one last good kick at it.

And for the fifth consecutive year, The Dock Rockers livened up the evenings during the End of Season Party trip, including the final night of the year, on which guests and staff alike put on their dancing shoes as the fireplace lounge was converted to Canada’s most remote night club. Special guest performer Dave Reimer, long-time bass guitarist of Barney Bentall and the Legendary Hearts, put on a vocal performance of classic rock nuggets that caught everyone’s rapt attention, including mine. The Dock Rockers putting on a show for guests!

The September to Remember series of trips also featured special guest mixologists, whose taste and artistry added measurably (pardon the pun) to the apres-fish and after-dinner hours. Special shout out to Tim Lambden of Vancouver’s Nightingale Restaurant and Steve Rosengarten of the Fairmont Pacific Rim Hotel for their classy talents during the final two trips of the season.

As I comb through the stats sheets for the last trips, I can see that the catch was once again a good mix of chinook and coho salmon and halibut of various sizes. There are three tyees on the list, and many chinook in the twenties. I chatted briefly during changeover with folks on the second-last trip of the year who told me they had spectacular weather for the first two days which allowed them lots of time on the water. Father-son fishing is the best! Chris and John Dale enjoying the September fishery. Derek Nyrose taking in a beautiful morning on the water. John Dale enjoying the perfect day – wood-fired pizza delivered to the boat, blue skies and quality time on the water.

Without question the highlight of that trip was a 30-pound tyee for seven-year-old Ethan Grange, grandson of The Club’s late co-founder, Rick Grange. My friend Dyane Legge deserves honourable mention for a 43-pound halibut, which isn’t at all unusual, save for the fact that she picked it up off Langara Rocks on a deep troll for salmon. A considerable amount of patience was no doubt required to coax that slab home. One of Dyane’s chinook! Pictured with Screamer and Lucy. Dyane Legge and Kristie Nyrose are all smiles with their catch!

We had to gut it out through periods of wind and rain on the first two days of the last trip, but that didn’t stop two anglers from picking up tyees and there is a bit of a story to go along with each. First, they were caught within minutes of each other on Tuesday afternoon off Langara Rocks. Secondly, one of them was caught by Dave Reimer, who has never done much business at all with a fishing rod in his life, but with great coaching from guide Evan Minigan, was able to draw the 32-pound model up to the boat. I’m happy to say that Dave didn’t hesitate to heed Evan’s recommendation to let the fish go. As he and his bandmates looked on, Evan held the magnificent chrome-coloured fish gently by the tail and rocked it slowly back and forth in the water. A minute later they watched it swim away, a touch confused perhaps but otherwise unharmed. Meanwhile, just a short distance away, Jonathan Asselin was equally successful landing his 31-pound tyee, which was a particularly voracious feeder, having taken the bait on not one but two lines run on downriggers by guide Pat Davies. Despite much effort, a successful release looked unlikely, much to Jonathan’s and Pat’s disappointment. No matter, the near simultaneous catch of these two fish capped off an extremely consistent season of fishing. Jonathan Asselin with a 31lb chinook guided by Pat Davies.

And me? I put my own chances on the backburner so that I could focus on guiding for one of my best friends and fishing partners since we were kids, Bernie Simpson (AKA Bluewater Bernard). Despite my substandard techniques, and owing to Bernie’s skills in battle, we had a successful time of it, highlighted by a pair of chinook salmon of 27 and 21 pounds for Bernie on the final morning of the season. Of course, everything else about our trip – the exquisite food, the impeccable service of skilled staff, the comforts of the lodge, the constant presence of humpback whales, and of course the music – all added up to an experience that friends and family members tend to never forget. And it is on this note we conclude. Bernie Simpson all smiles on last day of season with a 27lb chinook!

It’s not just about fishing. It’s never just about fishing. But you already know that. No doubt, you too have come to understand that there is nothing that strengthens the ties with those who matter most than a day on the mystical waters of Haida Gwaii. It’s what happens between the lines, so to speak. And it’s that, along with the precious gifts of the marine wilderness that keep us coming back.

Until next we meet friends, please stay safe and well. 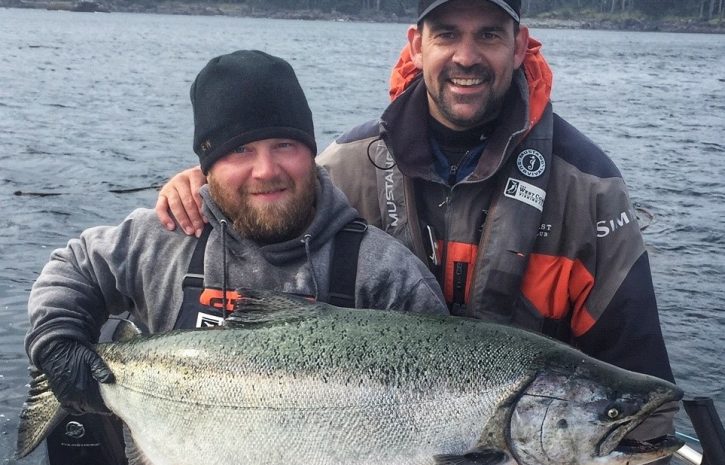