Women in Fishing – A Conversation with Jessica Haydahl-Richardson

It was not long ago that sport fishing was thought of as a man’s sport. Over the last decade, The West Coast Fishing Club has been working to change those perceptions and share stories of women who love the multi-faceted aspects of the fishing experience.

Jessica Haydahl-Richardson is a strong force striving to change the male-dominated sport. She is a world-renowned photographer, long-time friend of WCFC and a familiar face around our lodges. Her photography career began in the NHL however transitioned towards the sport fishing industry in a hurry. Jessica has been bringing her immeasurable talent to WCFC for over a decade now. In honour of Women’s History Month, we recently spoke with her about women in fishing, breaking barriers and how she has seen the industry evolve. 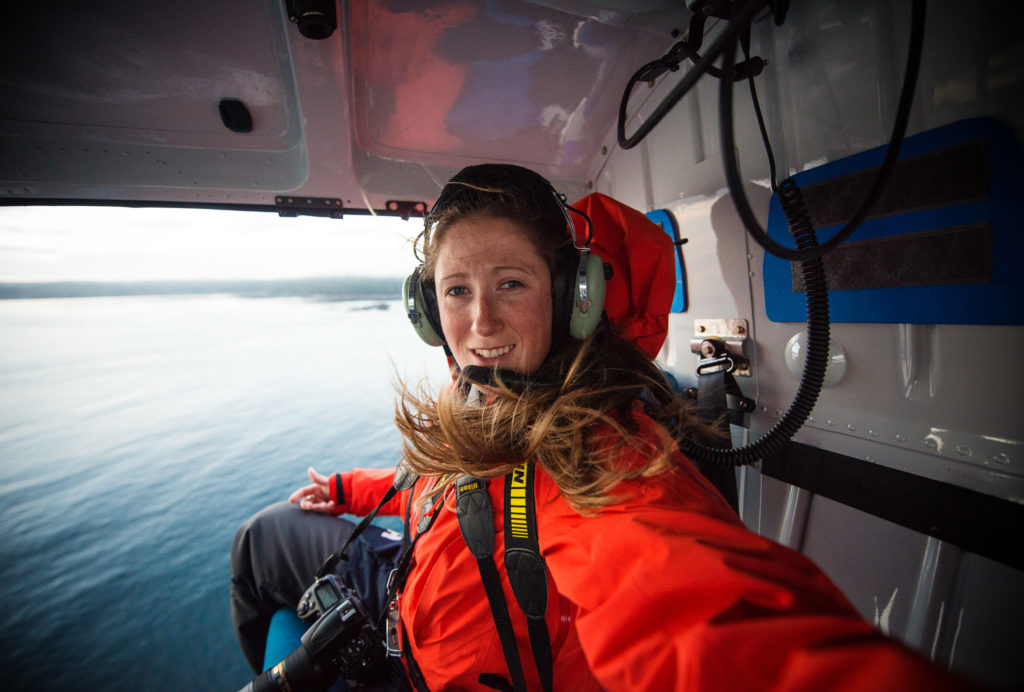 Jessica Haydahl-Richardson is a strong force striving to change the male-dominated sport of fishing. She is a world-renowned photographer, experienced angler, longtime friend of WCFC and a familiar face around our lodges.

SH WCFC: Tell us a little bit about yourself and how you got involved with WCFC

JHR: I began taking photos when I was 14 or 15 and launched my photography business in 2008. Growing up in West Vancouver, much of my childhood was spent on the water so when my mentor Jeff Vinnick came to me with the idea of shooting in Haida Gwaii, I jumped at it. The thought of getting to see whales, eagles and other wildlife up close had me excited. I knew if I was able to be in that environment, I thought I could capture some pretty cool images.

SH WCFC: Were you planning on a career in the fishing industry?

JHR: My dad was a tugboat captain for Seaspan for 47 years and I grew up on boats and around the marine environment my whole life. I would say Jeff introducing me to WCFC is what led me down this avenue and changed the trajectory of my career. I would have never dreamed in my life that this is where my photography career would have gone. I loved the NHL and shooting for newspapers however I found there was more opportunity in fishing. 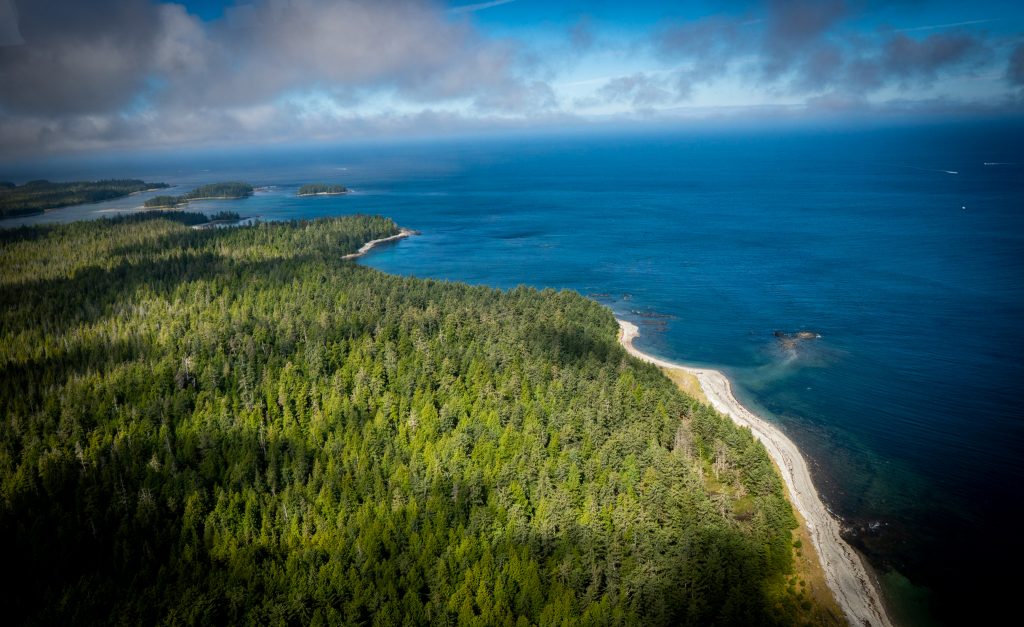 A stunning aerial view of Haida Gwaii from the helicopter en route to the lodge. Photo by Jessica Haydahl-Richardson.

SH WCFC: You have mentioned shooting for WCFC has been different. How so?

JHR: WCFC has always been ahead of the curve and forward thinking. The values of conservation and showcasing the many different aspects of the adventure has been what we’ve focused on. I’ve been lucky to have been given the creative freedom to shoot everything from the culinary experience to the releasing of fish, guests, wildlife, portraits and more. 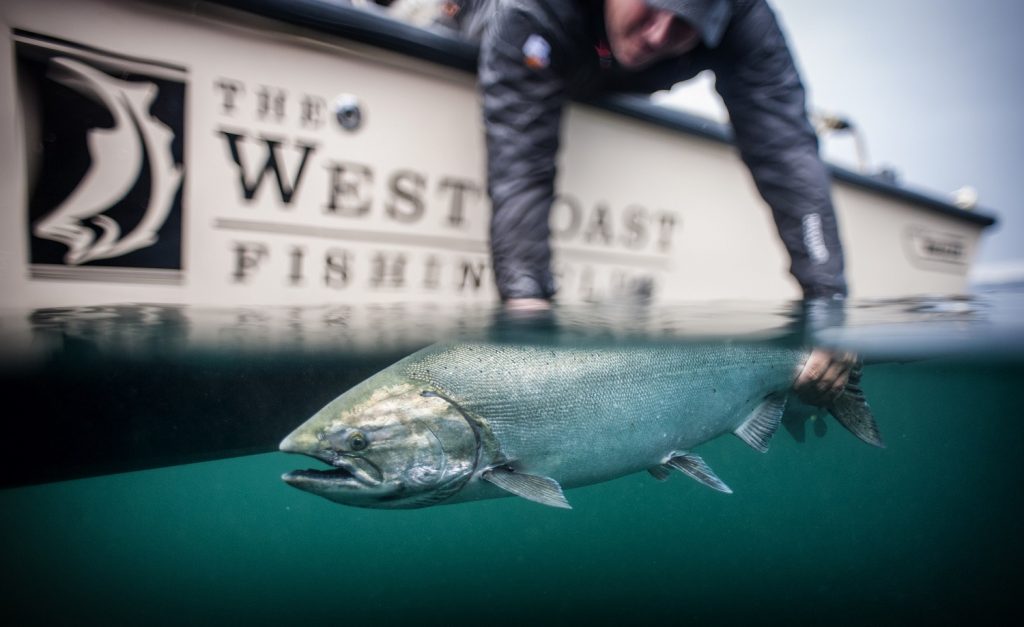 SH WCFC: What is it like to be a female in a predominately male industry?

JHR: Naturally at the beginning there were a few challenges as with anything, however my job was to focus on enhancing the experience of the guests by capturing their adventure for them. I appreciate how the owners and guests of WCFC have embraced me, my work and have been supportive over the years.

SH WCFC: In your time with us, have you noticed the demographic shift at The Club?

JHR: Yes! I’ve seen more women visit over the years which is encouraging. I would like to see more all-female corporate groups out there to bond over fishing, gourmet dining and enjoying all the lodges have to offer. I think if more people knew how incredible Langara Island and Port Louis are, you’d see even more groups of women and couples. 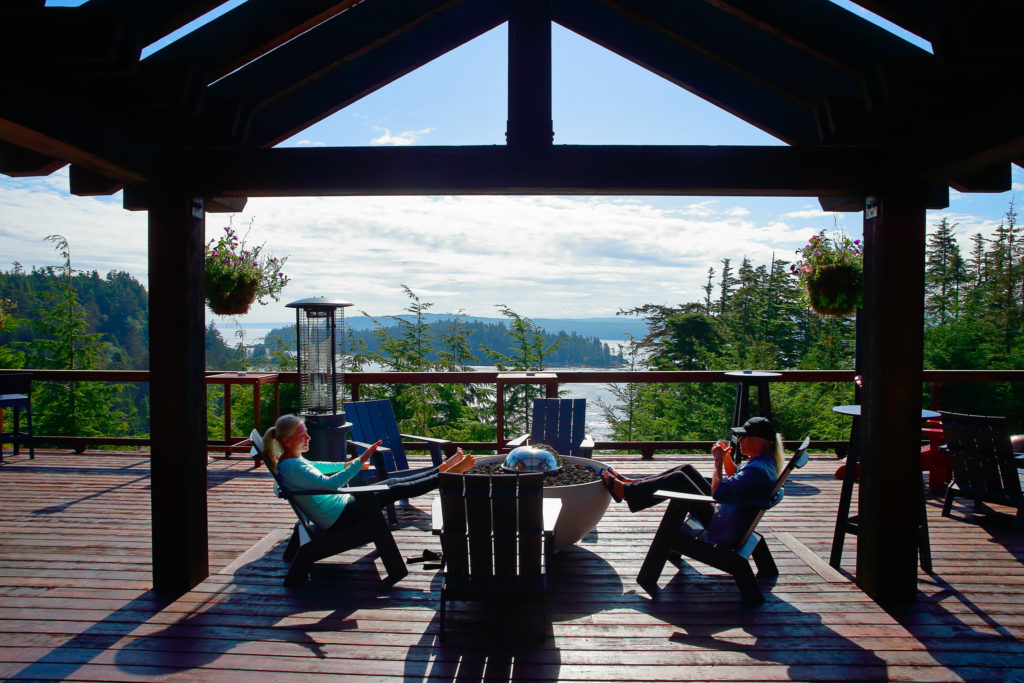 Ladies lounging on the back deck of The Clubhouse enjoying the 180 degree views of Parry Pass. Photo by Jeff Vinnick.

SH WCFC: I remember my first time visiting the lodge, I had never fished in my life. I had only been exposed to it through stories from my dad. After five minutes on the water, I was quite literally hooked and could not wait to go back. It was something I had no idea that I would like or enjoy, but it is such a fun thing to do. I think If more women tried it, they would feel the same.

JHR: Yeah! The very first females I think I ever photographed in the industry were Courtney Hatfield and Dyane Legge. I stand on the backs and shoulders of people like Courtney because of what she has done in the industry and having her own all-female fishing show. She is a pioneer of fishing in British Columbia and well ahead at that time.

Some of the best times I’ve had at WCFC are when I’ve taken an afternoon to fish and I’ve jumped in the boat with Dyane. She knows exactly what she’s fishing for, what gear she needs and is out there in all of the elements. I’ve learned a lot from her as at that time I didn’t know a lot about salmon fishing. She showed me how fun and adventurous it can be. It’s people like Courtney and Dyane that really show this great side of fishing.

I always say, If you feed me and keep me warm, I’ll stay out on the ocean all day. 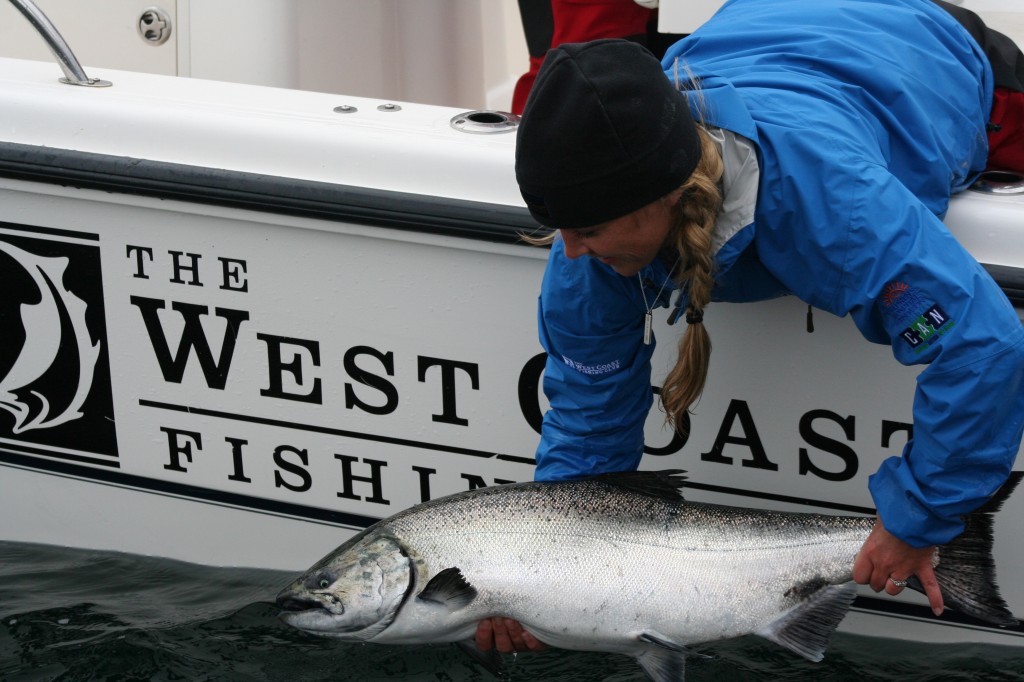 Courtney Hatfield is a pioneer of fishing in British Columbia. Courtney had her own fishing tv show and co-hosted Get Out! With Shelley and Courtney, which ran for 18 seasons on network television in Canada and the U.S. Photo by Jessica Haydahl-Richardson. 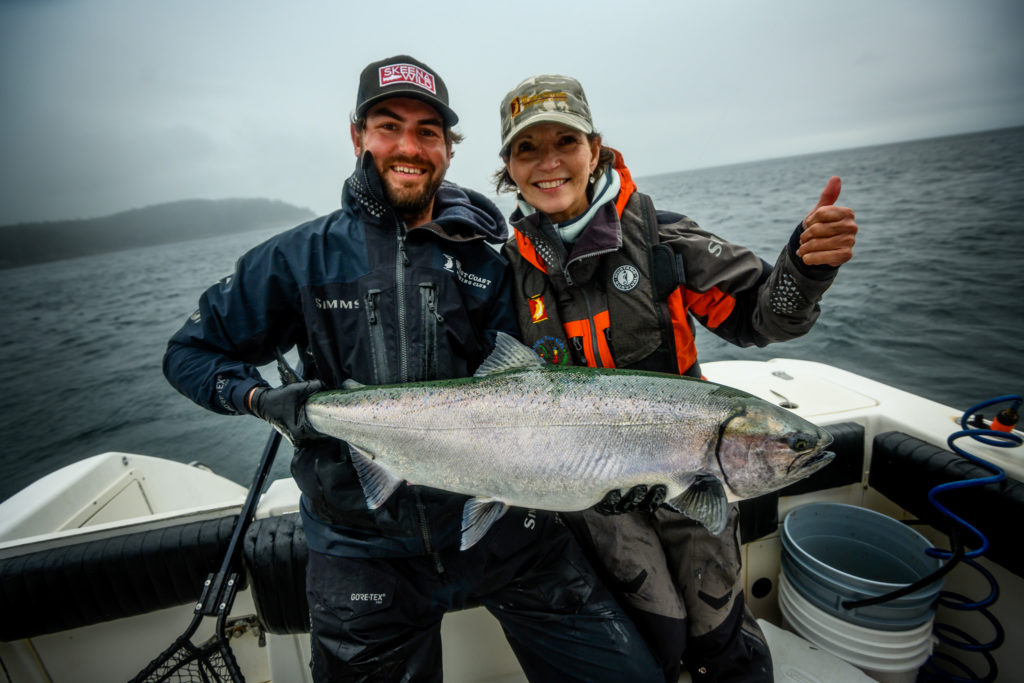 Dyane Legge is a seasoned angler who enjoys being out on the water with friends as well as on her own in the elements. Photo by Jessica Haydahl-Richardson.

SH WCFC: You’ve mentioned that you’ve spoken with female anglers on their first trip. What are their reactions to the experience?

JHR: Talking to someone who has just seen a humpback whale breach for the first time is incredible. A couple summers ago we had humpback whales bubble feeding around us. It’s so much more than fishing for me and that’s how I see The West Coast Fishing Club. Generally, when women get up there they are so appreciative of the fishing but also the lap of luxury inside. You know, things like having a glass of Moët & Chandon and enjoying a massage. From chatting with women over the years, I think that’s what they really love about it. 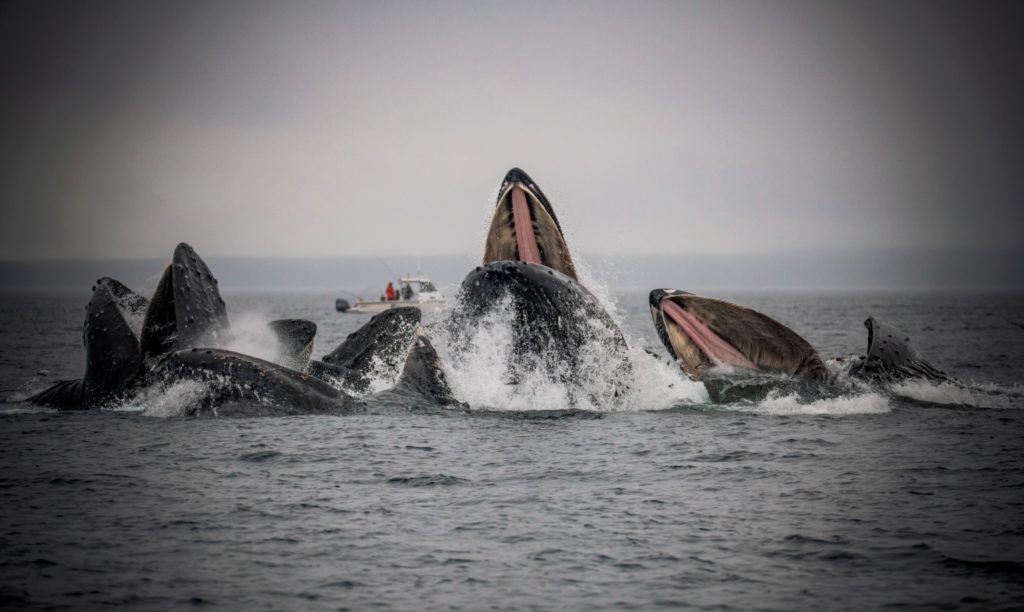 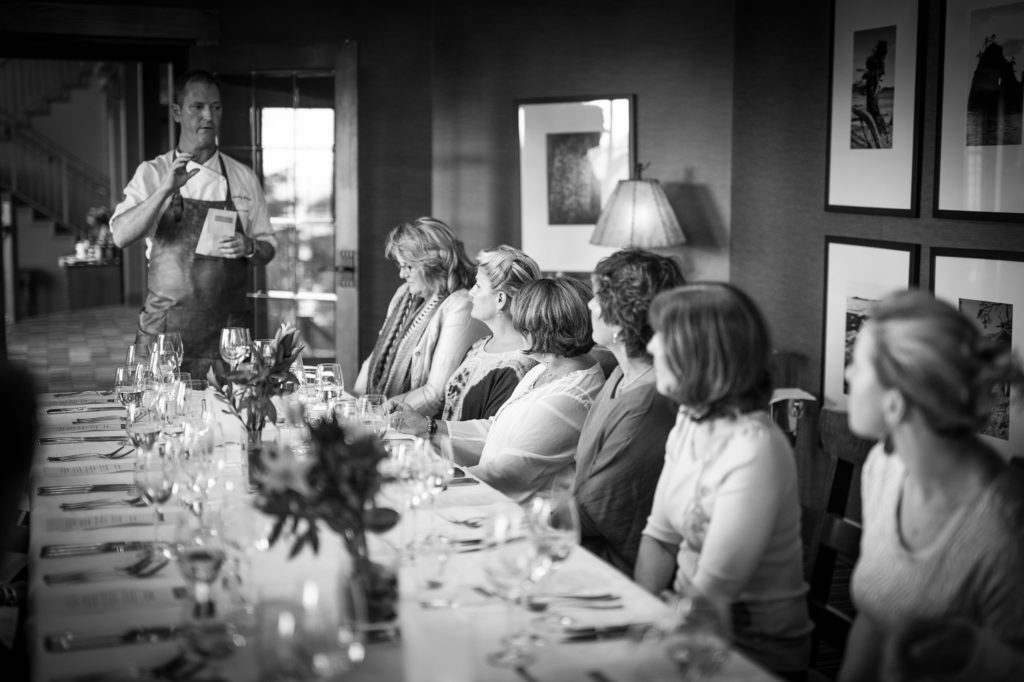 Guests listening to the featured menu of the evening. Photo by Jessica Haydahl-Richardson.

SH WCFC: To quote you, the fishing industry as a whole has begun to evolve including making gear specifically for women and putting more attention and detail into making it more comfortable to be on the water. Do you think there is still ground that needs to be broken?

JHR: I am still one of the only full-time working females in the industry and I hate that. I’m at the point in my career where it’s like, what is the point of this whole thing if I’m not working to champion other people forward. I’ve started developing and teaching some workshops for women to learn how to work their camera and get more involved. The more visual representation we see, I think the more it’ll encourage women to get out.

SH WCFC: What is the best aspect of Haida Gwaii in your opinion and tell us about your favourite photo you’ve taken at Langara Island.

JHR: Bald eagles. I love them! The wildlife never disappoints. The landscape is also so beautiful. My favourite shot would have to be this image of an orca with a rainbow behind it. It was raining and sunny all at the same time. It’s incredible how the shot worked out. There is also another rainbow image I took off the back deck of The Clubhouse. Those two images, I don’t know why but they are a great reminder of this amazing time and the beauty of this place. 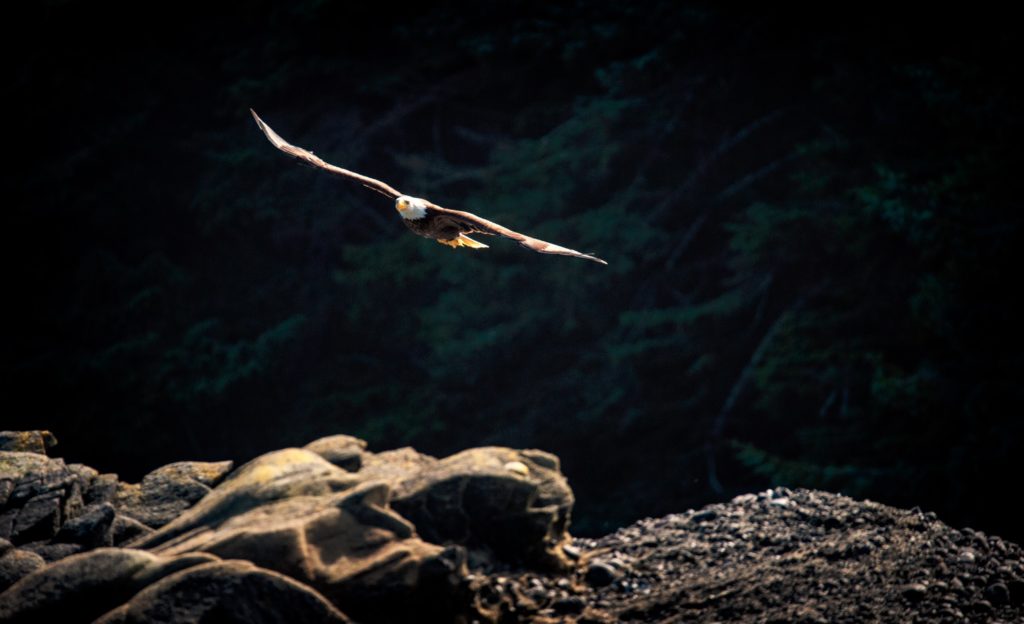 Bald eagles are Jessica’s favourite thing to photograph in Haida Gwaii. Their abundance in this region of the world makes them a very common sight for guests. Photo by Jessica Haydahl-Richardson.

An incredible display of wildlife and nature in Haida Gwaii. Photo by Jessica Haydahl-Richardson. 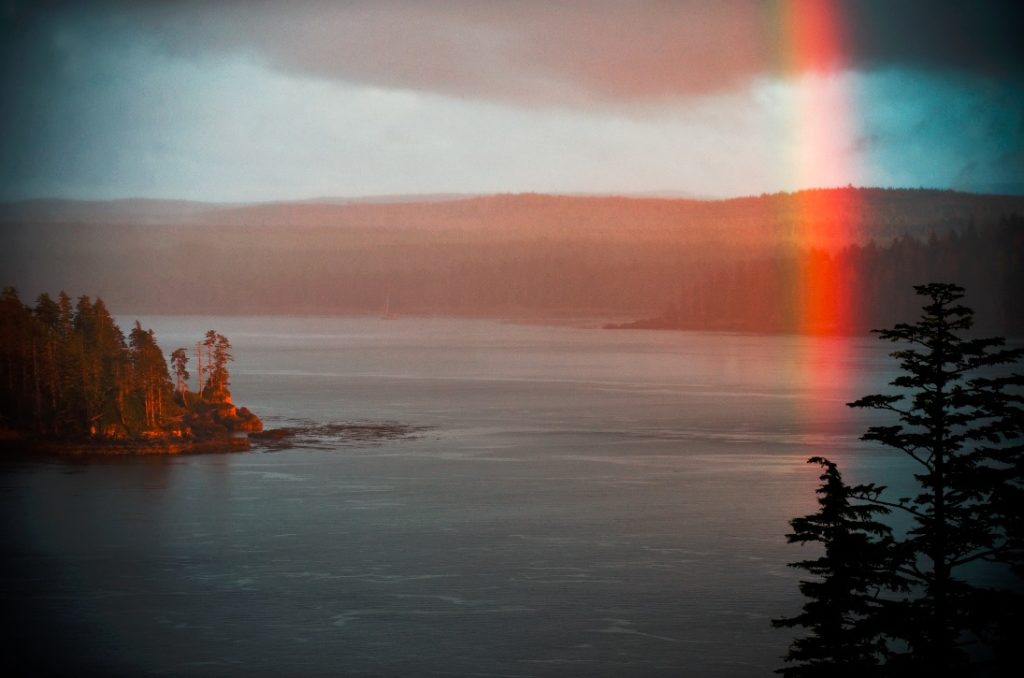 A favourite shot of Jessica’s captured off the back deck of The Clubhouse.

SH WCFC: What exciting projects do you have coming up and where can people follow your work?

JHR: It’s a busy year ahead! I’ve got three magazine covers coming out in the spring which is great. My very first written editorial piece called Behind the Lens is out this month. I also entered my short film featuring an all-female cast into a fishing film tour which is available online. After that, I have my commercial shoots and I will be resuming my teaching workshops this year.

Whether you’re craving world-class fishing, incredible wildlife displays, or one-of-a-kind culinary experiences, we welcome everyone to escape to beautiful Haida Gwaii, because for us, it’s never just about the fishing. Call us today to plan your next adventure: 1-888-432-6666 or click here to fill out an online inquiry.